Polar bears may appear ultra-adorable and cuddly from afar, but new research revealed one fun fact about polar bears that isn’t so cute: They have really smelly feet.

A new study published last week in the Journal of Zoology found that polar bear feet do indeed stink, but it’s for good reason. In the vast and barren Arctic, polar bears lack physical objects like trees and rocks that other bears can use as posts to leave scents to communicate. Instead, scented-glands on polar bear feet allow them to leave chemical trails for other polar bears—a tool used in finding a mate or making territory in the vast and barren Arctic.

To reach this discovery, scientists collected scents from over 200 polar bears and their paws around the Beaufort and Chukchi seas. They then froze the samples, and then provided them to polar bears in zoos around the U.S. They found that the polar bears’ response to the scents was largely seasonal, approaching the odors in the spring during the breeding season. The researchers also found prominent sweat-producing glands, surrounding by dense hair follicles, on the paws of two sampled females. 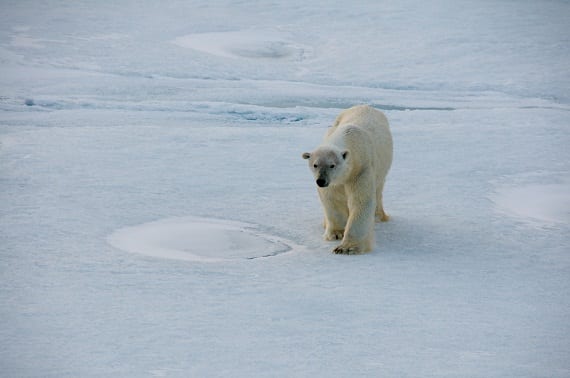 Because polar bears’ stinky feet play such an important role in facilitating social and reproductive behavior, the researchers caution that climate change could undermine polar bears’ abilities to communicate. They warn that fragmented sea ice will make it more difficult for polar bears to both leave and detect scented chemical trails, says BBC.

Polar bears are listed as threatened on the Endangered Species List and as vulnerable under the IUCN’s Red List of Threatened Species. Climate change is one of polar bears’ biggest threats: They spend most of their time on sea ice in the Arctic, so climate change and sea level rise not only degrade their habitat, but also impact their abilities for forage for seals—their main prey source—since polar bears hunt from ice. Ice loss may also lead polar bears to expend more energy, thereby decreasing their growth rates and reproductive abilities. Other threats include oil and gas development, pollution, and overexploitation.