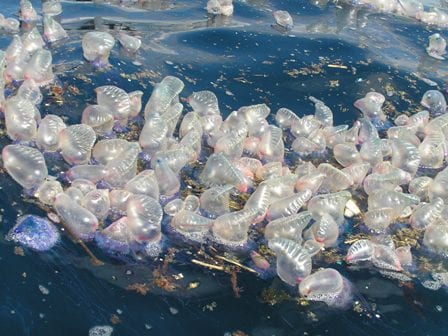 The Portuguese man-of-wars we have begun to see are fascinating and dangerous organisms, abundant in these waters in the Bermuda Triangle, rich in Sargasso.

Today, their presence has decreased a little, but once in a while someone on the Ranger still sounds the alarm: man-o-war starboard side! man-o-war by the prow! We see them pass, drifting at the mercy of the wind and surf. They make up a diminutive fleet of living ships, barely 30 centimeters in length. Their sails are transparent and blowing in the wind and when the sun rays illuminate them, they create iridescence of a thousand hues.

“Portuguese man-of-wars have similar aspects to jellyfish and belong to the order of the Siphonophora,” Ricardo contributes with a scientific note. “But unlike jellyfish, each Portuguese man-o-war is not an isolated individual, but a colony.

It is an organism made up of multiple individuals who specialize in different functions in order to survive. Some of them act as sails, others as buoys and others become long tentacles to grasp nutrients. Their tentacles can reach three meters long, but when they travel, they retract them”

Therefore, we can see ahead of time, that when the Oceana divers submerge in the Sargasso area to document the site, the Portuguese man-o-war will be one more added complexity, because the sting from it is highly dangerous. Depending on the size of the animal, it can produce allergic reactions and even cardiac arrest.

When the Portuguese man-of-war senses a living being near, its tentacles go into action, shooting a stinging filament that plunges into the skin and injects venom. They feed on larvae and eggs of small organisms, as jellyfish do. But they are not food for anyone. Maybe for turtles.