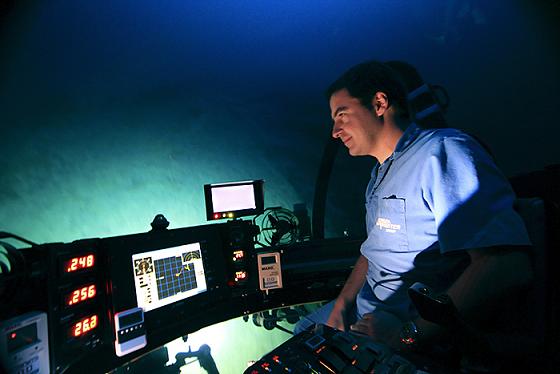 On February 8, Oceana and National Geographic launched an expedition to explore the waters off of the remote Desventuradas Islands more than 500 miles off the coast of Chile. By documenting marine life and habitat the team hopes to persuade the Chilean government to protect more than 60,000 miles surroundinig this archipelago. Below is an expedition journal entry from Oceana South America Vice President Alex Munoz. Photos © Oceana

After more than a week of expedition, this place continues to surprise us. Yosy discovered a coordinate on the map very close to San Félix that corresponds to a seamount whose peak is only 10 meters deep. This means it is the perfect place to go to with our divers and submarine DeepSee.

We leave early in Argo to look for the seamount. After a few hours, the echo sounder detects 10 meters! Yosy had been right! The group of scientists and cameramen quickly get into the water.

Enric, Avi and I are the fortunate ones that will go in the DeepSee to a completely unknown place. As we start to descend, Avi, our pilot, says, “This is the exact definition of exploration!” And wow, was he right. As my colleagues and I are very excited, before we know it, we have reached 130 meters. Thousands of fish, from brecas to Jack mackerel, sharks to vidriolas surround us.

In a matter of minutes, Avi brings us to 250 meters. A wall full of corals and gorgonians (or sea fans) get our attention for quite a while. With incredible precision, Avi maneuvers the submarine’s high definition camera and records each species that crosses our path.

We continue descending… 300, 340, 365 meters deep! Although there are less fish, between 320 and 340 meters, a large quantity of different types of lobsters appear, smaller than those of Juan Fernández that one normally sees in shallower waters.

A crab holds what looks to be a crystal (or glass) sponge. “It looked like it was holding a sun to illuminate the depths of the ocean.”

Enric focuses his view on a timid but beautiful orange and green fish. It is easily frightened with the lights and it hides in a hole of an imposing rock in the seamount. “This is a new species,” he says to us.  Avi turns off the motors and the lights and we are completely in the dark. The excitement of being at this depth with no lights or sound is incredible, but at the same time, the peace that you feel is unparalleled. With a small red flashlight we see this beautiful fish dare to leave its hiding place. After a good while trying, three of them appear and we are able to record them!  With this video in hand, we continue our travels of the deep.

We start to ascend slowly by a wall different to that of the descent and the marine life springs from all sides.  We see a precious nudibranch, with an intense orange color, at 300 meters. A little bit above this, in one of the most beautiful scenes of the trip, a crab on a terrace holds in its two claws what could be a crystal sponge.

Later, more and more corals start to appear with clouds of juvenile fishes living among them. All the articles that I have read about the importance of seamounts and how they are areas of reproduction and nourishment and how the populations of small fish support the life of the largest fish are made clearly evident in this image. As we arrive at the surface, after being so excited, I hadn’t even realized we had been submerged for five and a half hours!

During the immersion, I cannot help but think that just a few days ago, the new law in Chile that protects all seamounts from bottom trawling took affect. Four years ago, Oceana began a strong campaign that culminated in the banning of this type of fishing in vulnerable marine ecosystems, including the immediate and preventative closure of all seamounts, 118 total in Chilean waters, which covers a surface of almost 150,000 km2.

During this time, how many times did they say to us that there was nothing in the seamounts, that the Chilean sea contains almost only sand and that bottom trawling would not have any impact on the sea floor? Now I have seen with my own eyes what a seamount really is without the impact of bottom trawling – using the typical phrase of our Costa Rican friends that make up Argo’s crew – I can say that in the seamounts, there is “Pura Vida!” (pure life).