Andy Sharpless is the CEO of Oceana; this post also appeared on Politico.

Why do we take terrible risks to drill for oil in the Gulf of Mexico and elsewhere along our coasts?

Most people would say we drill to protect ourselves from big fluctuations in the price of a gallon of gas that are caused by the major upheavals in the Middle East. Look at this chart (data from the Energy Information Administration): 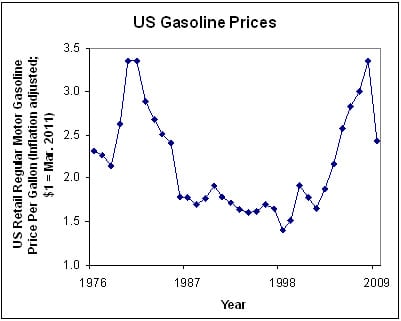 Their argument is that the more oil we can produce domestically, the lower the price we’ll pay at the pump. It’s not that they like the sight of oil wells off our beaches. The main reason they are doing so is they think it will save them money – especially as gas prices approached $4 a gallon recently.

This idea is not only intuitively appealing, it is repeatedly, and unambiguously, promoted by important government officials from both parties. Sen. Mary Landrieu (D-La) defended new legislation that would expand offshore oil drilling, saying “this bill would do more to lower gas prices at the pump than any other plan.” Sarah Palin criticized President Barack Obama, “His war on domestic oil and gas exploration and production has caused us pain at the pump.”

Former President George W. Bush, who had considerable private sector oil industry experience, said it could “take pressure off gas prices over time by expanding the amount of American-made oil and gasoline.” Rep. Doc Hastings (R-Wash.), the chairman of the House Natural Resources Committee, insists, “Gas prices are closing in on $4 per gallon…because of the de facto moratorium on drilling permits.”

Pundits, like Steve Doocy of Fox, endorse this argument, by saying that the solution to rising gas prices was “just poke a hole in the ground.”

Yet, during the last two years, the amount of oil pumped in the U.S. has been going up, not down — as you might think from all these comments. So this strongly stated argument is wrong; let’s examine the facts. The following chart shows the share of U.S. oil consumption coming from outside the country compared to the price of gas from the chart above. 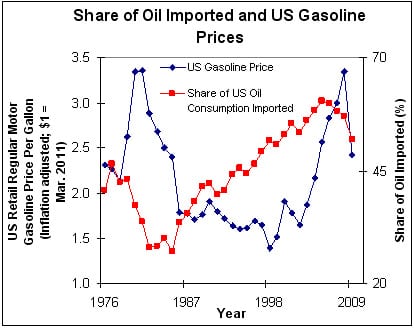 Now look at the price of gas at the pump compared to the international price of crude oil: 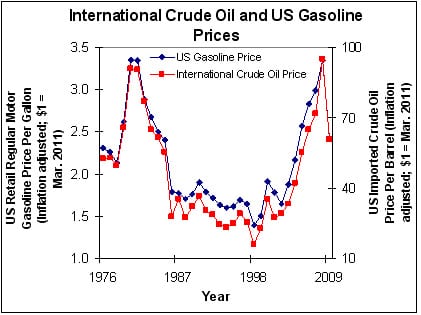 This seemingly counter-intuitive result is consistent with how the world’s oil markets actually operate. Ask yourself this question: When BP or any other big oil company finds oil in the Gulf of Mexico, do they sell it to us at a discount because we were kind enough to let them drill in America?

No, they don’t. They sell it all over the world at the price for oil set in the international oil market. As international commodity, oil is priced on an international basis — according to global supply and demand. Global demand is the reason the price is going up now. The world’s economies recover from the slump of the past few years and the developing economies, like China, are increasing their demand.

Meanwhile, offshore drilling for oil is simply too risky for our beaches and fisheries. Want proof? Oil companies’ shareholders insist on having a law limiting their liability in the event of a disaster.

I don’t think these risks are worth it. You might disagree. But if you do, remember: anyone who tells you we should do it to lower our price at the pump doesn’t care about the facts.