It’s no surprise that the oceans are home to some of the most fascinating animals, from the massive blue whale, the world’s largest animal, to creatures like octopus and squid that can change their coloration instantly. But it’s not just modern-day ocean inhabitants that are awe-inspiring and sometimes frightening: Many of the oldest, extinct ocean creatures are just as impressive.

Recently, there’s been a chain of marine fossil discoveries that provide a fascinating look into the state of the oceans millions of years ago. From the recent discovery of the first semi-aquatic dinosaur, capable of eating sharks, to the more well-known stromatolites—sedimentary rocks formed by layers of cyanobacteria—the fossil record shows that the oceans have been home to diverse life for billions of years. 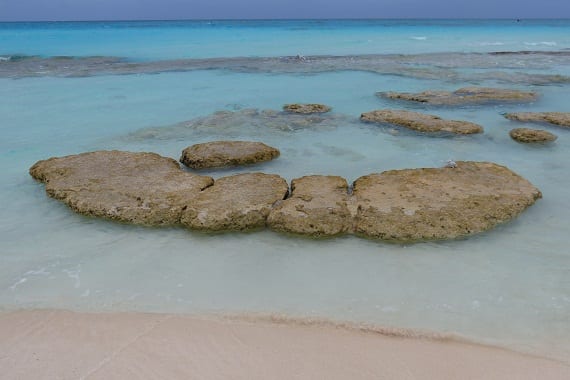 Stromatolites on Highborne Cay in the Bahamas. (Photo by Vincent Poirier / Wikimedia Commons)

Take a look below to learn more about recent marine fossils discoveries.

Scientists recently discovered three dolphin specimens in Peru’s Pisco-Ica desert, which lines coast of southern Peru. Researchers say that these “toothy dolphins” are a new species of the extinct family squalodelphinids, and are related to the endangered South Asian river dolphins that live today in India’s Indus and Ganges rivers. This discovery helps scientists understand more about the evolutionary history of freshwater dolphins, and when they diverged from marine dolphins, one scientist told Live Science.

Fossil evidence published in Science last month unveiled Spinosaurus aegyptiacus—the largest predatory dinosaur known to have roamed the planet to date, stretching nine feet longer than the largest T. rex fossils. A suite of characteristics show that it’s the world’s first semi-aquatic dinosaur—like nostrils placed on top of its skull to allow it to breathe at water’s surface and teeth suited for catching fish. It lived 95 years ago during the Cretaceous-era in what was once a river system between Morocco and Egypt where species such as sharks and lungfish were said to swim, according to National Geographic. Researchers built upon their findings with previous Spinosaurus aegyptiacus fossils and historical records to piece discover this towering species.

Researchers recently uncovered a fossilized shark egg case in Doncaster, South Yorkshire, England—a rare find for the inland area and sharks in general. It’s rare for such a soft structure to fossilize, say scientists, and less than half of shark species are oviparous, or lay eggs like this species did. Scientists say the shark egg case is 310 million years old.

You may have heard of the Calaveras Dam replacement project in Fremont, California over the past few years for it being a treasure chest of marine fossils. Discoveries have been continuous since construction began in 2011, and most of the fossils are thought to be about 20 million years old from the Miocene Epoch. Scientists have uncovered about 500 fossils so far, including teeth from 40-feet-long sharks, massive scallops, clams, barnacles, and teeth of Desmostylus, a creature that resembled today’s hippos.