Though you might not know it, California, Oregon, and Washington waters are home to deep-sea cold water corals that are every bit as brilliant and fascinating as their tropical counterparts. These corals explode with color and texture while playing an important role in our ocean ecosystems. Corals provide shelter, protection from strong currents and predators, and important areas for feeding, spawning, resting, and breeding. Because they play an essential role in supporting healthy fish populations, corals are afforded special protection under the law as Essential Fish Habitat (EFH). This week, Oceana submitted a conservation proposal to the federal Pacific Fishery Management Council (PFMC) that would protect these very corals from bottom trawling, the most destructive form of fishing allowed on the U.S. West Coast.

Oceana’s proposal is based on science, the government’s legal obligations, and discussions with our partners, the fishing industry, and others. It seeks to protect important habitat most at risk from bottom trawling while providing continued opportunity for commercial fisheries. This proposal put forth by Oceana and its partners defends and refines the more than 136,000 square miles of sensitive seafloor habitat that were successfully protected in 2005—ensuring the most sensitive areas remain off limits to bottom trawling—and proposes new protections based on new findings from our own research expeditions and other scientific data. The proposal also balances re-opening some previously closed areas to commercial fishing in exchange for even more sensitive areas that have been identified since 2005.

Our proposal is part of the PFMC’s review process for EFH. At its November 2013 meeting, the PFMC will decide whether to consider proposals like this one.

Stay tuned for more information on how you can help support Oceana’s proposal to protect U.S. West Coast corals! 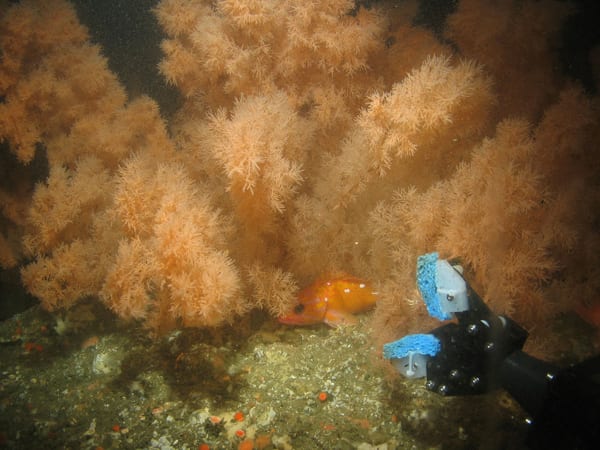 Vibrant and beautiful coral and sponge structures are critical to supporting healthy populations of groundfish species—like rockfish, Pacific Ocean perch, and Pacific cod—as well as non-commercial marine, life like sea stars, nudibranchs, and octopuses. Widely distributed from the Bering Sea to California, Pacific deep sea corals are found at depths of 100 to 10,000 feet. These corals are able to withstand the cold waters of the deep but cannot obtain energy directly from the sunlight, so they instead capture microscopic organisms and detritus (organic debris formed from the decay of organisms) from the surrounding water. Corals and sponges are found across a diverse array of seafloor types including submarine canyons and seamounts.

Corals are actually tiny little animals and the underwater gardens they create can contain more than one hundred species of corals and sponges towering up to ten feet tall; yet they advance at a rate of only one-half of one inch each year. Such a delicate and slow-growing animal sensitive to disturbance has little chance against bottom trawls, the most destructive fishing gear on the U.S. West Coast. Bottom trawlers drag large weighted nets across the ocean floor to catch commercially marketable groundfish, clear-cutting a swath of habitat in their wake. When coral and sponge habitat is destroyed, the many species it supports also disappear.