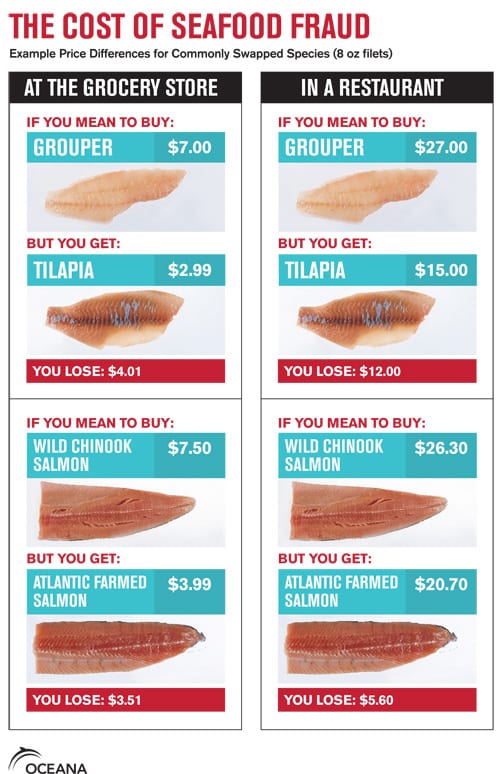 Today, Oceana released a new report after investigating the high price of seafood mislabeling in the United States, and the results were shocking: consumers who think they are purchasing a high-quality fish could in fact be actually getting a cheaper fish worth half the price. This report comes on the heels of a study Oceana released in February that found one-third of seafood tested across the country was mislabeled according to Food and Drug Administration (FDA) guidelines. This new report follows up on Oceana’s results by examining the economic cost of seafood fraud that is passed on to consumers who pay for a high-quality fish and receive a less expensive or less desirable species.

“Swapping a lower cost fish for a higher value one is like ordering a filet mignon and getting a hamburger instead,” said report author and Oceana senior scientist Margot Stiles. “If a consumer eats mislabeled fish even just once a week, they could be losing up to hundreds of dollars each year due to seafood fraud.”

Oceana interviewed experts working in the seafood industry to determine what drives cost differences for different species, and reviewed 300 menus from 12 different cities to help estimate retail prices. According to the report, a diner who orders grouper but instead receives a filet of tilapia could be losing $10 for an eight ounce fillet, while the common mislabeling of farmed Atlantic salmon for wild salmon can add an extra $5 to a customer’s bill.

Consumers can also be victims of fraud in grocery stores, where fillets of higher-cost fish are priced $4 more than cheaper substitutes. These dramatic price differences create a clear economic incentive for fraud.

Seafood follows a complex path from boat to plate, often crossing ocean basins and stopping in different countries before it makes it to the final point of sale.  Each stop in the supply chain offers opportunity for fraud.  Without traceability, or requiring information to follow the fish through the supply chain that is transparent and verifiable, consumers can be subject to fraud at every step of the way.

“Consumers deserve to know their seafood is safe, legally caught and honestly labeled, including information like where, when, and how it was taken out of the ocean.  The more information that follows the fish, the harder it will be for fraudsters to rip off American consumers,” Stiles said.

In March, Congress introduced legislation targeting seafood fraud, known as the Safety and Fraud Enforcement for Seafood (SAFE) Act, which would require traceability for all seafood sold in the U.S. Let’s tell our policymakers that, for the sake of our pocketbooks, our health, and our oceans, we deserve to know exactly what’s on our plate. Please sign our letter urging Congress to sign the SAFE Seafood Act.