Earlier this month, Spain’s Ministry of Agriculture, Food, and Environment (MAGRAMA) approved a proposal to add four marine areas as Sites of Community Importance to the Natura 2000 Network—the backbone of marine protection in the European Union. These four areas—the western system of submarine canyons in the Gulf of Lions, the Channel of Menorca, the mud volcanoes of the Gulf of Cádiz, and the Bank of Galicia—stemmed from LIFE+ INDEMARES, a project Oceana is a partner on. LIFE+ INDEMARES aims to protect biodiversity within Spain’s ocean ecosystems by identifying valuable areas for the Natura 2000 Network. By the time all 10 areas outlined in LIFE+ INDEMARES are added to the Network, Spain will have protected 5 percent of its ocean ecosystems.

“The declaration of Sites of Community Importance within the INDEMARES framework will be a breakthrough for the conservation of marine habitats and species of the deepest areas of the Spanish seas, increasing the protected area to 5 percent,” Oceana in Europe executive director Xavier Pastor said in a press release. “The United Nations Convention on Biological Diversity demands 10 percent, and Oceana therefore proposes new areas, such as expanding the marine part of the National Parks of Cabrera and Doñana and the protection of areas such as the Balearic seamounts or the waters of El Hierro.”

Though Oceana congratulates MAGRAMA on this protection order—the first of three in 2014 that will protect high seas and seabeds in Spanish waters—Oceana still urges MAGANARA to protect regions within the Mediterranean. During the comment period on this draft regulation,

Oceana sent MAGRAMA a series of representations about how they did not mention areas in the Mediterranean Regulation. This is fundamental fisheries legislation for Europe that protects coralligenous and maerl habitats, which are present in two of the newly protected areas. 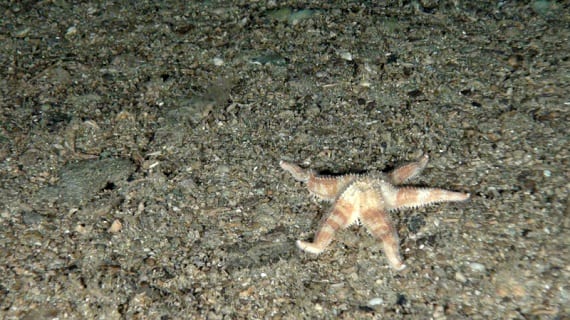 A sea star (Hacelia superba) along an underwater mud volcano in the Gulf of Cádiz, one of thew newly protected areas. (Photo: Oceana)

“The Mediterranean Regulation should be referred to in this ministerial order, so that there is no doubt about the government’s intention to strictly protect these habitats which are essential for the fishery resources of the Mediterranean,” Pastor said in the press release. “Precisely in this regulation, special mention is made of the Natura 2000 sites as priority areas for implementing protection of seagrass, coralligenous, and maerl beds.”

These protections are a result of a project lead by the Biodiversity Foundation which found that the natural values of these areas justify their inclusion as part of the Natura 2000 Network. Nonetheless, Oceana believes this is only one of many steps still to be taken to protect the marine environment, as required by regulations.