Ghosts, zombies, and witches are the typical frightening Halloween characters, but the oceans have some fantastic and ghoulish creatures of their own. To celebrate Halloween, here are three of our favorite spooky sea creatures!

Ocean-going creatures have a very good reason to be wary of the ghoulish stonefish— they are the world’s most venomous fish. (One sting from their sharp dorsal-fin spines can kill a human.) Stonefish lay motionless on the ocean floor, using their camouflage to hide from unsuspecting fish swimming nearby. When a fish gets too close, the stonefish sucks its prey into its mouth  like a vaccum. 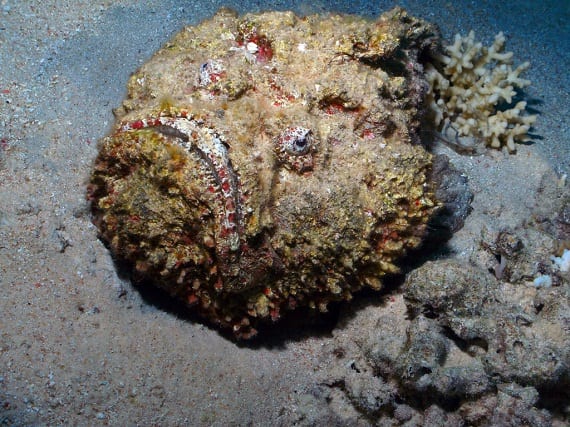 We introduced you to the sinister fangtooth in our Creature Feature series, but we couldn’t resist including it in this list of spooky sea creatures. The fangtooth has the largest teeth in the ocean relative to body size, which it uses to devour other deep-sea fish and squid. The largest two fangs of the lower jaw are so long that the species has evolved a pair of opposing sockets on either side of the brain to accommodate these fangs when its mouth is closed.

You’re not alone if you’re surprised that frilled shark is actually a shark. Most sharks only have five gills, but the frilled shark has six, and all but one are covered by frills of skin. Not much is known about these rare, deep-water sharks, but they are occasionally caught as bycatch in bottom-trawl fisheries.