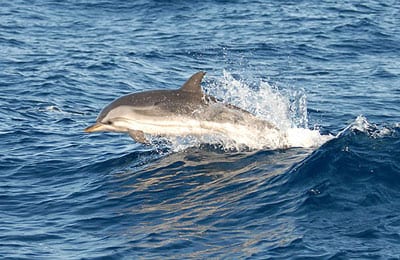 We begin the day by planning a dive in front of Cape Peñas, but we had to suspend it due to the wind and rough seas, and decided to set sail to Cantabria.

We recorded the depth at various points around Llanes Canyon in order to get an idea of the morphology of the seabed and identify possible dive spots.

As we were doing this, we sighted a group of 25 striped dolphins jumping out of the water some seven miles from the coast, possibly hunting. At exactly the same time, the depth probe emitted two signals, one at 150 and another at 500 meters depth. The shallower depth was probably a false alarm caused by the currents. These dolphins, one of the most abundant species in the Cantabrian, are threatened by the use of non-selective fishing gear, such as pelagic trawling, which causes the deaths of many of these animals.

We stayed the night at the port of San Vicente de la Barquera.