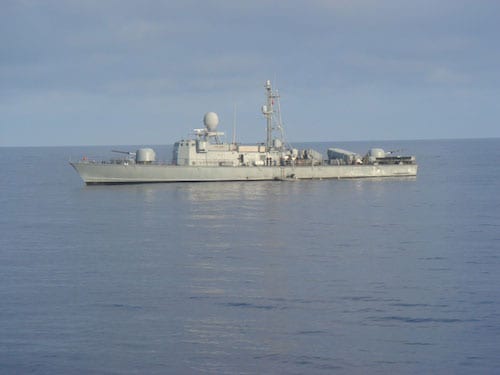 Early this morning with calm seas, the Tunisian Navy Warship stopped our vessel and sent a platoon of five men onboard the Oceana MarViva Med from a small inflatable boat. At the time, we were heading innocently westward towards Algeria in Tunisian territorial sea near the island of La Galite. Over the past few days, the Tunisian Navy has been monitoring our activities in international waters — along the border of Tunisia and Pantalleria Island, Italy — outside the 12 nautical mile limit from the Tunisian coast.

Throughout the past few days, the Tunisian Navy would frequently call our vessel over the radio questioning our activities and motives. Due to International Maritime Organization (IMO) regulations, the MarViva Med is obligated to have our automatic identification system (AIS) activated all the time, so we are easily monitored from land.

Every time we changed our course or maneuvered to try to document driftnet fishing boats, we received a call from the Coast Guard, requesting information about our intentions and what we were doing. They do not “see” the fishing boats, as those do not have AIS. So the Coast Guard station sees only the MarViva Med course suddenly doing strange turns and changing speed and course very often, making the Tunisian Navy curious.

Onboard for approximately two hours, the Tunisian Navy inspected the boat thoroughly and interviewed both Captain Jan Rautwaara and expedition leader Xavier Pastor about our intensions.

They were intrigued about the reason and the objectives of our research. They were concerned that we had hydrographic instruments but we told them that our only instruments were our cameras. Xavier showed them Oceana’s 2006 and 2007 reports on French, Italian and Moroccan driftnetters and also the report “European Trawlers are Destroying the Oceans,” a title Xavier thought they would like. They finally seemed to understand the purpose and the importance of the research.

Xavier further explained to the Tunisian Navy how we were documenting the activities of four Italian driftnetters and how we managed to get pictures and identification of one of them while hauling in the net. The other three boats flied into Tunisian waters when they saw us. We followed them and that was when we were identified by our AIS transmissions by the Tunisia Coast Guard land station.

Since our sighting of these four driftnet fishing boats, we have been constantly monitored by the Tunisian Navy. Xavier showed the Navy Officer pictures of the Italian driftnetters we have taken and asked me to prepare a DVD copy of the pictures to take back to their ship.

During the process of selecting the pictures, the photos of our cheerful crew watching the soccer European final between Spain and Germany appeared in the screen and the situation went smoothly after this, as the officer started to smile. The crew onboard the warship had also been watching the game last night.

They left the MarViva Med with the information and allowed us to keep sailing. We are now proceeding to Algerian controlled waters. During the entire process, Xavier asked Gorka Leclercq, videographer, and me, photographer, to discreetly photograph the boat.

The situation with the control of the waters in the Mediterranean is very volatile these days. Although the international law seems to admit only the 12 miles territorial waters (no formal EEZ in the Mediterranean), there are a lot of unilaterally declared “fisheries protection zones”, “environmental protection zones” and “platform/continental shelf waters” where the navies and coast guards of the individual countries basically act as they want, allowing illegal fishing to take place if there is an agreement of the fishing companies with the specific government or making life difficult to independent observers. We have to be extra careful in our movements.