Turtle Migration and the Case of Lucky 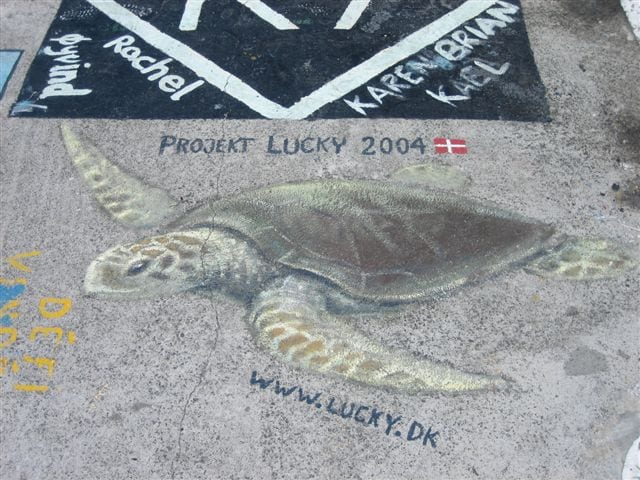 Today, we encountered a small turtle swimming all alone. This reminds me that we are navigating on marine turtle’s main migration route.

Until relatively recently, the life cycle of marine turtles was unknown and it was not until 1986, when the American biologist Archie Carr — one the foremost experts on marine turtles in the world — published his theory that turtles nested on beaches of North America followed by a migratory journey along the Atlantic, using gulf currents.

In 1993, Spanish researchers Ricardo Aguilar, Julio Más and Xavier Pastor –two of them are Oceana members — corroborated this hypothesis, adding new data on populations of the eastern Mediterranean.

Investigator Marcos Santos, from the University of Azores, came across a curious fact in relation to how turtles, as is the case with many other marine animals, are attracted by the presence of underwater mountains. Because of significant amount of nutrients found in the surrounding area, turtles go to seamounts to feed. The steeper the inclination of the mountain, the more productivity is observed. As you may remember, we are in Macaronesia, area of underwater mountains and volcanoes.

The main threat faced by marine turtles is incidental death from entanglement among fishing line hooks, which is the gear used to capture tunids and swordfish. Oceana is making efforts to reduce incidental captures of marine turtles in both sides of the Atlantic. Several modifications to fishing gear and bait have been proposed — prohibition zones and seasons, changes to the time of day when fishing lines are deployed — in an attempt to reduce the significant number of incidental captures of turtles that occur around the world. We must keep in mind that marine turtles are considered endangered species.

One of these proposals is the use of circular hooks in the shape of a “G”, which was first proposed in Japan as a way to reduce labor related accidents to fishermen who were easily injured with hooks in a “J” shape. This was also considered a way to reduce incidental captures of turtles. It is harder for turtles to bite them and if so, the hook remains caught in the mouth, without being swallowed down to the esophagus.

Currently, swordfish fishery in the United States has all together substituted “J” hooks and replaced them by “G” hooks. Oceana advocates for this substitution to be implemented in Europe, together with other modifications to the fishing line industry.

During our meeting with researcher Marcos Santos, who studied under Archie Carr at the University of Florida, he told us about his experimental work on turtles that have been captured by fishing lines with different types of hooks. He said that the location of the hook in the turtle’s body was pivotal in relation to the ensuing mortality rates.

He added that the location of the hook in the body seems to alter migratory behavior; turtles who carry hooks in the esophagus oddly change course towards the east. Turtles who have hooks caught in their mouth or throat, apart from the fact that the hooks are more visible, therefore facilitating extraction on the part of fishermen, continue their normal migratory move.

During our stay in Faial, we heard the news on the project involving Lucky, a loggerhead turtle who remained captive in a Danish aquarium during five years and returned to the sea in the Azores in September 2004 as part of a study on the feasibility of returning turtles to the wild after they are kept in captivity. Lucky is being monitored by the Danish project NERI through a transmitter tagged to her carapace.

Four months after her release, she was found swimming en route to the beaches of Trininidad and Venezuela, while other tracked turtles — who were never in captivity — stayed behind in the Azores area.