The vast ocean can appear foreboding and intimidating, but one little bivalve is lighting things up on the seafloor. The appropriately-named “disco clam” is a small mollusk that’s able to flash an array of neon lights from its lips.

Disco clams, and their spectacular lightshow, can be found in tropical waters throughout the Indo-Pacific region. Living in clusters of two or more, the clams reside in crevices along reefs in depths up to 150 feet, according to Science Daily. Even though disco clams have a vibrant talent, their ability has gone relatively unnoticed and undocumented—until now. 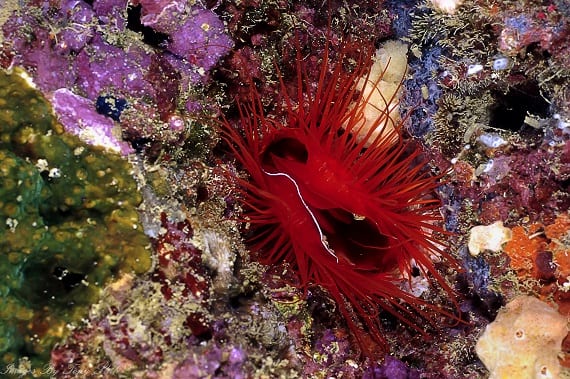 Through her doctoral research on disco clams, biologist Lindsey Dougerty debunked the previous assumption that disco clams rely on bioluminescence to flash their lights, and has illuminated the real reason behind the clam’s groovy skill: The secret to the disco clam’s lightshow is all in the lips.

The interior of the clam’s lip is full of nanospheres of light-reflecting silica, while the outside of the lip has no silica and is highly light-absorbent. So, instead of producing their own light, disco clams actually reflect ambient light of the sea, much like a disco ball.

There’s still question as to why the clams flash their lights, but Dougherty suspects the lights could be used to attract prey, scare away predators, or attract other clams to settle nearby.

Now thanks to newly released footage by the University of California, Berkeley, you don’t have to travel to Indonesia like Dougherty did to catch a glimpse of disco clams lighting up the sea floor. Check out the video below: