In recent years, record numbers of barrel jellyfish have swarmed UK waters by the billions. These jellyfish are massive—stretching nearly 3 feet wide with tentacles that can extend for 6 feet. But in a recently released video, a diver off the coast of UK waters swam next to what may be one of the biggest barrel jellyfish ever spotted, according to The Telegraph.

Usually inhabiting deep waters off the British coast, huge swarms of barrel jellyfish are now making their way closer to beaches, leaving scientists and beachgoers baffled. Speculations as to why these jellyfish are appearing in such vast numbers and so close to the shore range from warmer waters causing population fluctuations, to the tides and winds in the Celtic and Irish seas impacting where the jellyfish end up. 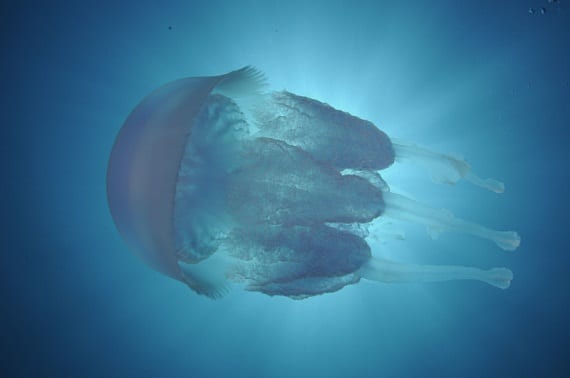 A barrel jellyfish in the Mediterranean. (Photo: Oceana / Carlos Minguell)

Barrel jellyfish are most commonly found in the southern and western shores of the British Isles. This year, numbers have been particularly high off the coasts of Cornwall, Devon, and south Wales. Despite their large size, these billowing creatures pose no threat to humans: They feed on microscopic plankton and have harmless stings.

Check out the video below to see a remarkable encounter with one of the largest barrel jellyfish: