The 2010 BP oil spill disaster killed 11 people and spewed over 200 million gallons of crude oil into the Gulf of Mexico, damaging ecosystems, local economies, and lifestyles for many Gulf residents. It’s been nearly four and a half years since the spill, but its effects on marine life and Gulf fishermen still persist.

This spring, shortly after the four year anniversary of the spill, Oceana released a short documentary, “Drill, Spill, Repeat,” to commemorate the tragedy and raise awareness about the dangers of offshore drilling. The film shows just how dirty and dangerous offshore drilling can be and features interviews with Gulf fishermen who have been on the frontlines, struggling to cope with BP’s aftermath.  It also explains how seismic airgun blasting works—a dangerous practice that’s a stepping stone to offshore drilling in the Atlantic, and was recently approved by the Obama Administration for the U.S. East Coast despite widespread opposition. 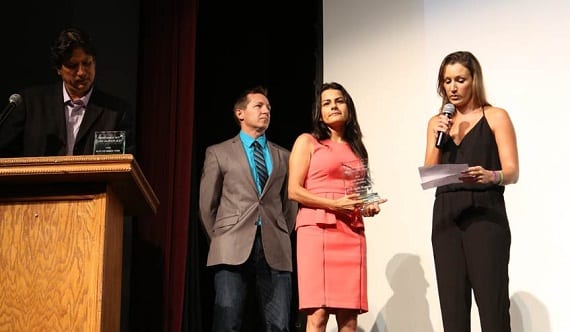 Oceana’s climate and energy campaign director Claire Douglass released the following statement in response to the films’ award, which was read aloud at the festival:

When it comes to offshore drilling in the U.S. one overarching theme stands out—we drill, we spill, then we repeat. Four years after more than 200 million gallons of oil gushed into the Gulf, the BP disaster serves as much more than a bad memory. As we share stories of harrowing despair, inspiring resilience, and the perseverance of the American spirit, we hope to ignite a conversation and more importantly, stimulate public engagement to demand concrete action to stop the expansion of offshore drilling. We offer this documentary to activists who would like to show it at house parties to help engage social networks so that we can break the cycle of Drill, Spill, Repeat.

Oceana would like to thank the Sunscreen Film fest and everyone who participated in the film, especially Dr. Bonny Schumaker, Alfred Sunseri, George Barisich, and Linda St. Martin, who we lost recently but her spirit lives on in this film. This film is dedicated to the families who lost their loved ones in the BP oil spill disaster and to the people in the Gulf who lost their way of life due to BPs recklessness and our constant quest for more oil. Your stories are not forgotten. Let us all work together to stop repeating the mistakes of the past.

Oceana actively campaigns to create clean energy sources, like offshore wind, and to protect the U.S. Atlantic coast from the dangers of seismic airgun blasting and offshore drilling. Click here to learn more, and take a look below to watch “Drill, Spill, Repeat.”