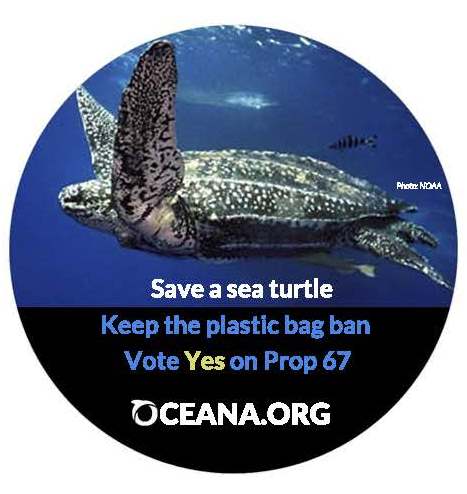 On this November voting ballot, please vote YES on Proposition 67, the California Plastic Bag Ban Referendum. This measure will give voters the option to vote for or against upholding California’s current plastic bag ban, established by Senate Bill 270 — a law that prohibits large grocery stores from distributing single-use carryout plastic bags. The bill signed into law by Governor Jerry Brown also encourages shoppers to bring their own reusable bags or purchase recycled or compostable bags for a small fee (a minimum of 10 cents). Eventually this ban on plastic bags will also apply to food marts and convenience stores. A yes vote will uphold current California law on keeping single-use plastic bags away from large stores, while a no vote will overturn Senate Bill 270.

Plastic bags covering our streets, parks, and waterways are not just unpleasant to the eye; they also pose a serious risk to the environment, especially when it comes to wildlife. According to the California Coastal Commission, more than 365,000 plastic bags were collected by clean-up crews up and down the California coast between 2008 and 2014. Since plastic is not biodegradable, it remains in the marine environment for a very long time, breaking down into smaller and smaller pieces that absorb toxic chemicals. These pieces of plastic are ingested by ecologically important wildlife — like sea turtles, fish and marine birds — and enter the food chain that we rely on.

Approximately 100 billion petroleum-based single-use plastic bags are used each year in the United States, using up around 12 million barrels of oil each year. California distributes 19 billion of these bags, many of which end up littering our beautiful beaches, lakes, and oceans and causing harm to wildlife. Marine animals can mistake plastic pieces for food and ingest or choke on these small fragments. Over 267 species of marine life have been affected by plastic bag litter, one of which is the endangered Pacific leatherback sea turtle — the largest of all sea turtles and an animal designated by Governor Jerry Brown as California’s official state marine reptile. The Pacific leatherback swims an incredible 6,000 miles from nesting beaches in Indonesia to California waters to feed on jellyfish. These sea turtles easily mistake plastic bags in the water for jellyfish, ingesting them and suffering serious consequences such as malnutrition, starvation, intestinal blockage, and drowning.

Why is the plastic bag ban on the ballot?

According to the Sacramento Bee, soon after Governor Brown signed the plastic bag ban into law, out-of-state plastic bag manufacturers — South Carolina-based Hilex Poly Co. Inc., Texas-based Superbag Corp., Advance Polybag Inc., and New Jersey-based Formosa Plastics Corp. — threatened to repeal the law, spending almost $3 million in an effort to collect enough voter signatures to qualify for a referendum. As reported by Ballotpedia, the majority of the almost $6 million in contributions to overturn the bag ban through Prop 67 came from out of state groups. Comparatively, 100 percent of the funds spent to uphold the bag ban, totaling $2 million, came from entities that are in California. The effort to overturn the measure is led by the American Progressive Bag Alliance — a group that was founded in 2005 to represent the United States’ plastic bag manufacturing and recycling sector. The Alliance promotes plastic products and public policy initiatives against plastic bag bans and taxes nationwide.

What happens to the ten cent (or more) fee to purchase bags?

Opponents of the bag ban claim that the bill is a scam for the grocers to pocket millions of dollars in bag fees and deny consumers a “free” service. In reality, SB 270 stipulates that the money collected and retained by the stores must be used to comply with the requirements of the law, to pay for the actual costs of providing recycled paper bags or reusable grocery bags, and/or the costs associated with a store’s educational materials encouraging the use of reusable grocery bags.

Voting to uphold Senate Bill 270 is a crucial step toward standing up for the environment. Single-use plastic bags are easily replaced by reusable cloth bags and bags made from recycled products, as well as starches, biodegradable polymer, and other renewable resources. Reducing our dependency on disposable plastic bags will lead to less plastic-ridden beaches and waterways, resulting in a more beautiful and sustainable future for California.

So, if you’re a resident of California, get out to the voting polls this November and vote yes on Proposition 67!