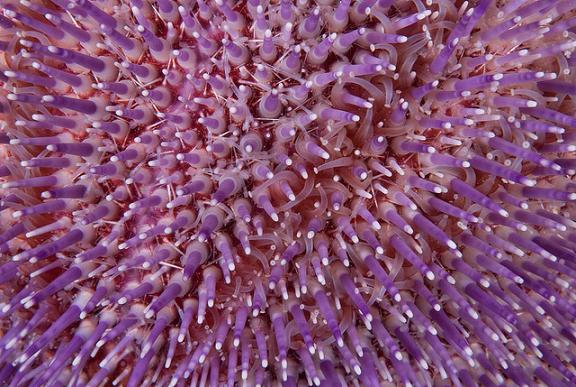 It’s Echinus esculentus, also known as the European edible sea urchin or the common sea urchin. Seen in a rainbow of colors, from the most common pink to purple, yellow, or even green, the common sea urchin lives in the waters of Europe, from Finland and Iceland in the north to Portugal in the south.This picture was captured by the Oceana Ranger during an expedition off of Galicia, Spain.

As its name suggests, the edible sea urchin is, in fact, edible, and is prized as a delicacy. Only the gonads, or roe, of the sea urchin is eaten, and is often prepared and served in sushi as uni.  Although the process of harvesting sea urchins is comparatively environmentally friendly, as  urchins are harvested by hand by professional divers and there is little to no habitat destruction or bycatch, the common sea urchin is listed as “near threatened” on the IUCN Red List of Threatened Species, and sea urchin populations in parts of the United States have been overfished.