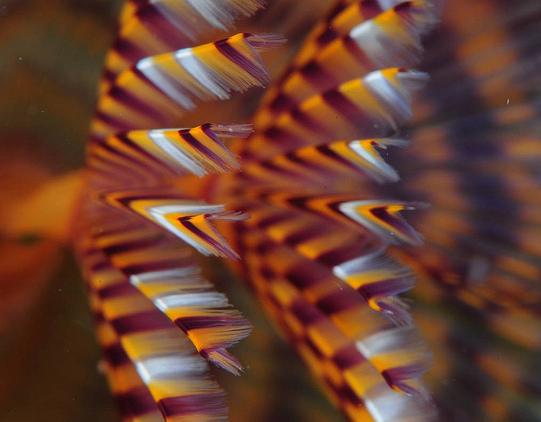 These of course are the brillliantly banded feeding tentacles of the European Fan Worm. These flamboyantly decorated “feathers” catch food particles that drift by in the currents and are able to retract at lightning speed when threatened. The rest of the animal is encased in a papery tube of hardened mucus which it secretes as it grows. The fan worm is a favorite meal of the gilt-head bream, a fish popular throughout European cuisine. Although it’s native to the Mediterranean and the Atlantic European coast, the European Fan Worm has become a nuisance in recent years in Australia and New Zealand, where it was introduced accidentally and has since become an invasive species. This picture was caught by our Ranger Expedition off the coast of Almeria, Spain.

Follow the Ranger Expedition online as it explores and documents life on seamounts in the Atlantic. Their work will help in developing conservation plans for these unseen and rich underwater habitats.