Recent national news stories have shown emaciated California sea lion pups being rescued and admitted to marine mammal rehabilitation centers. The sight of hundreds of withered sea lions is reminiscent of the all-too-recent California sea lion “unusual mortality event” in 2013 followed by a significant number of stranded and dead sea lions last year. Dying sea lions and strandings are becoming less unusual and a more frequent occurrence. In fact, the 2015 sea lion deaths are already on pace to exceed the 2013 numbers. About 70 percent of sea lion pups are expected to die this year before weaning age.

So, why are these pups stranding and dying?

It is simple. The sea lions are starving.  Nursing female sea lions don’t have enough food to eat; primarily fatty forage fish like sardine and anchovies and they are spending more time foraging, which means less time feeding their pups. In turn the pups are not getting the nutrition they need, and people are finding them stranding on beaches, weak, emaciated and dying.

As the National Oceanic and Atmospheric Administration (NOAA) stated following the 2013 mortality event, these sea lion pups are starving and malnourished due to a “change in the availability of sea lion prey, especially sardines” (NOAA Fisheries 2014).  This preliminary finding suggested the sardine population was spawning further offshore, outside of the foraging range of nursing California sea lions. At the same time, however, other key forage fish prey like anchovy and hake are spawning closer to shore or spawning locations are unchanged. So, a shift in the spawning location of sardine alone does not explain the cause. What is happening is that there is an overall decline in the abundance of forage species. Importantly, NOAA scientists are now corroborating the hypotheses that seas lions are starving due to a lack of prey, not just that the prey moved someplace else.

At a scientific conference in December 2014, NOAA scientists reported

Indeed the sea lion population has been steadily increasing at a rate of over five percent per year and the latest population estimate is that there are over 300,000 California sea lions off the U.S. West Coast (NOAA Fisheries 2015). Nobody knows what the sea lion carrying capacity is (how many sea lions the environment can naturally support), but right now, the population is clearly being limited by the abundance and availability of forage fish. 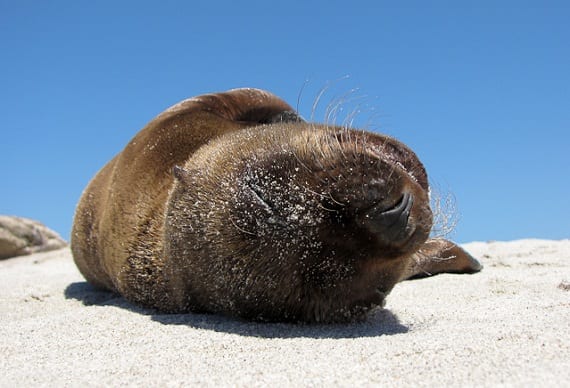 The one thing we can address is the commercial fisheries that are competing with the sea lions and other ocean wildlife by targeting sardine and anchovy.

In 2010 two NOAA scientists (Zwolinski and Demer 2012) published a paper predicting the collapse of the Pacific sardine population. The authors concluded in the abstract:

[a]larming is the repetition of the fishery’s response to a declining sardine stock – progressively higher exploitation rates targeting the oldest, largest, and most fecund fish.

Though the paper was subject to a great to deal of controversy and debate within the agency, the scientists’ predictions came true. The Pacific sardine population has collapsed.

The 2014 sardine assessment found that the “spawning biomass” is at the lowest levels in over 15 years (Hill et al. 2014). The current population  assessment estimates the spawning biomass at 306,237 metric tons, which is far below the “critical biomass threshold” (or the minimum amount of fish that should be in the ocean before fishing should occur) of 740,000 metric tons identified in the Zwolinski & 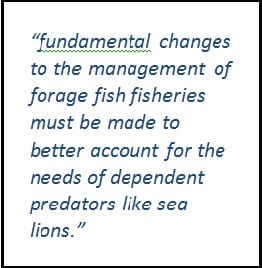 Demer 2012 study. Since 2007, the sardine population has declined by 74 percent (1.05 million metric tons) and it continues to decline with no clear signs of recovery (Hill et al. 2014). Over the most recent seven year period the fishery has removed 715,000 metric tons of sardines. Therefore, while we can only speculate what the decline would have been in the absence of fishing, over two thirds (68 percent) of the recent seven-year decline are attributable directly to fishery removals. In other words, any fishing on sardines right now is overfishing, as the population is not even replacing itself, much less providing a surplus.

Given the poor reproductive signals, in all likelihood, the next population assessment due in April 2015 will show even fewer sardine off the West Coast.

So, what can be done? There are two trains of thought here. Some people will say there is nothing to de done, just learn to get comfortable with dying sea lions. We believe, however, that fundamental changes to the management of forage fish fisheries must be made to better account for the needs of dependent predators like sea lions. Again, any fishing on Pacific sardine right now is overfishing.

Under the current management regime, the fishery is allowed to continue each year until there the estimated sardine biomass falls to 150,000 metric tons. Oceana has called on federal fishery managers to change the management regime so that directed commercial fishing for sardine stops when the population size goes below 640,000 metric tons. A higher “cutoff” is supported by the findings of the Lenfest Forage Fish Task Force (Pikitch et al. 2012) and it is consistent with the critical biomass threshold identified in the Zwolinski and Demer (2012) study. What is more, the same sardine population is also fished by Canada and Mexico. There is an international tragedy of the commons that must be addressed or all three countries together will continue to overfish this shared resource, risking wiping the sardine population out entirely.

So what are fishery managers doing to address sardine and anchovy management?

U.S. fishery managers have reduced sardine catches in recent years but they are failing to address the fundamental flaws with the sardine harvest control rule. In fact, in 2014, the federal fishery management council voted to change its harvest management regime to allow for overall increased sardine harvest, while ignoring calls to address the international distribution of the sardine population and the drastically low cutoff for when fishing ultimately stops. Oceana and others have also called on federal managers to set precautionary limits for anchovy management, but so far federal fishery managers are silent. 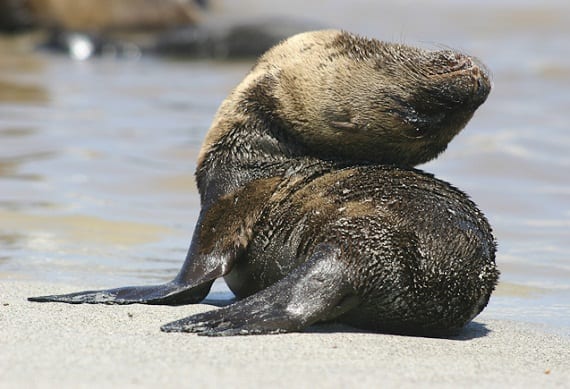 Sea lions starving on the beach are just the tip of the iceberg. As described recently in the Los Angeles Times, the decline of forage fish off the West Coast is sending ripples throughout the entire ecosystem and it could affect ocean wildlife and fishermen for years to come. People value a healthy and wild ocean ecosystem and while we cannot control an entire ecosystem, we can control how many forage fish are directly removed by commercial fisheries. It is high time managers heed these clear and obvious warning signals and fundamentally change the management of sardine and anchovy so as to provide for the needs of diverse and abundant ocean wildlife.