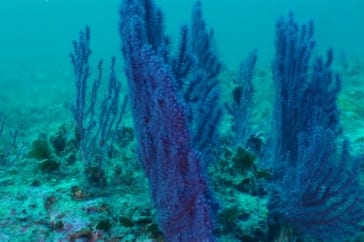 The Cabrera Archipelago has been a sea-land National Park since 1991. It is one of the best preserved natural enclaves of the Spanish Mediterranean. This applies to its area with spectacular wind-shaped stubby vegetation and geology and what lies underwater. These protected areas, when they are well managed, hold a sample of how the Mediterranean would be if we treated it with the respect and care that it deserves.

We have come again, as in years past, to take samples from the seabeds that lie outside the park’s limits. On previous expeditions, we were able to document deepwater areas going down to more than 100 m, to the North as well as to the East and South of the archipelago. Today we have headed to the Eastern area of the archipelago again to film the deepwater laminarian forests and the red gorgonians that exist in the area. These species and the coralline reefs that we have filmed lie in abundance here. They are well developed and are still in very good condition. These are without a doubt spectacular seascapes worthy of immediate protection. This is why the expansion of the park’s limits to at least the East would ensure the preservation of these important marine habitats and would add value, efficiency and relevance to this National Park.