New maps from Oceana highlight concerns from the Department of Defense (DOD) over expanded offshore drilling activities and infrastructure in the Atlantic Ocean. According to DOD, the Outer Continental Shelf (OCS) hosts a wide variety of training and testing activities critical to military readiness and our national security. The new maps provide a visual representation of conflicts between Trump administration proposals for expanded offshore drilling activities and current military operation needs identified by DOD, such as undersea warfare training and air-to-surface bombing. DOD has classified an estimated 94 percent of the waters off Virginia’s coast and an estimated 78 percent of the waters off Georgia’s coast as largely incompatible with offshore drilling due to longstanding military operations.

Although the Atlantic Ocean was removed from the proposed five-year plan for offshore leasing in March 2016 and all pending permits for seismic airgun blasting in the Atlantic were denied in January 2017, both are now back on the table (as well as new areas in the eastern Gulf of Mexico, and Pacific and Arctic oceans), following an executive order from the Trump administration in April. 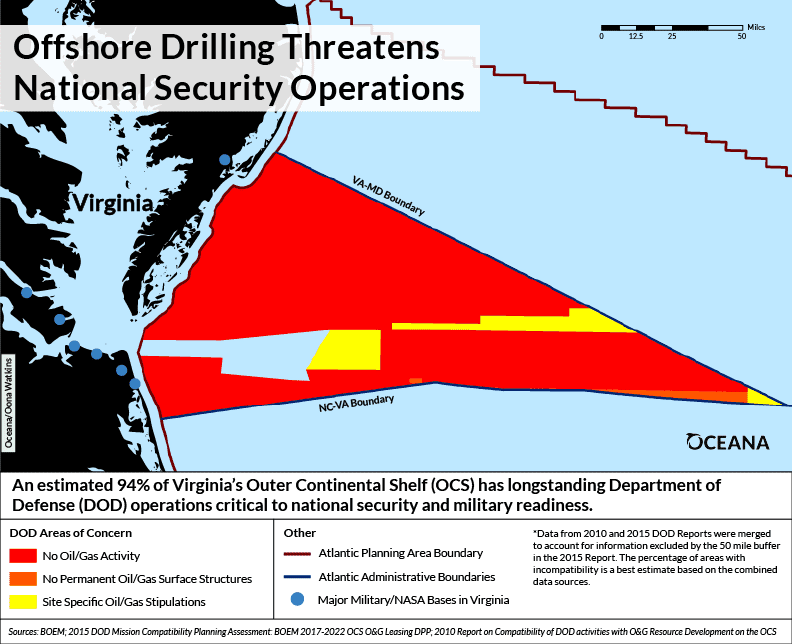 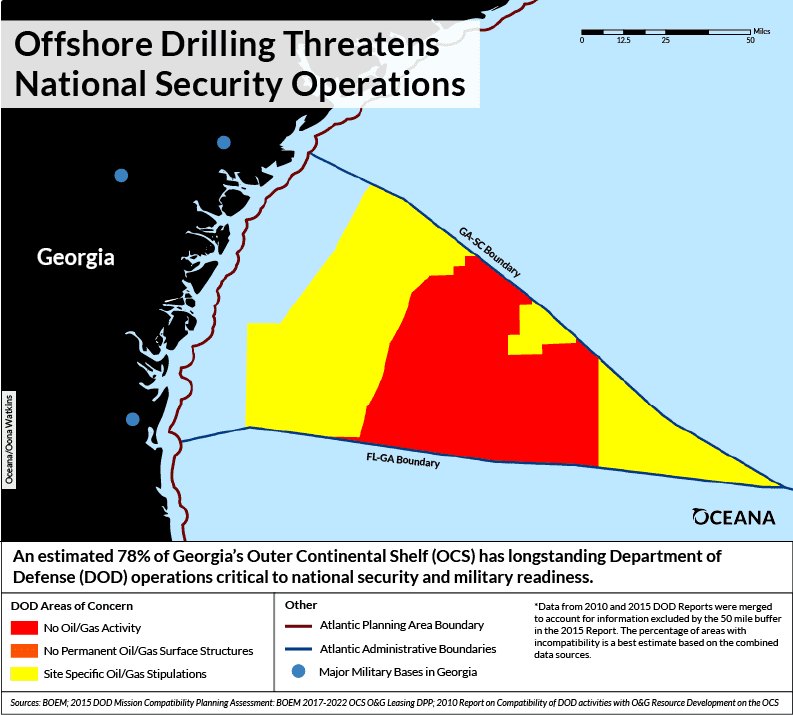 The Atlantic has several longstanding ocean uses that directly conflict with potential offshore drilling activities, including those essential to national security. DOD has expressed significant concerns with oil and gas (O&G) activities along the East Coast.

Oceana’s maps draw upon and visualize information from DOD’s 2010 and 2015 studies of military operations compatibility with oil and gas development. For areas visualized, Oceana depicts the latest DOD study information currently available between the two studies (2010 and 2015). The 2015 report excluded some OCS areas from the study that were previously assessed in the 2010 report. Oceana’s analysis produced conflict estimates that are extrapolated from both data sets.

DOD conducts training, testing and operations in the airspace, sea surface, subsurface and seafloor of the OCS – all of which are critical to military readiness and national security. DOD classified significant acreage within the Atlantic Planning Area as incompatible with their day-to-day activities, which include operations like live fire testing, torpedo testing/training, live surface-to-air missile and ordnance exercises, among many others.

NASA’s Wallops Flight Facility, a key location for operational testing, integration and certification of NASA and commercial orbital technologies, has an extensive offshore launch hazard area in adjacent Atlantic waters. The presence of O&G activity here could impact the facility’s operations – potentially preventing NASA from meeting its own launch commit criteria, which are a set of conditions required to proceed with any launch. Even the temporary presence of support aircraft or ships within a mission’s hazard area can impact range safety criteria, causing missed launch opportunities such as resupply missions to the International Space Station.