Daily updates about the Refugio oil spill are posted on the California Department of Fish and Wildlife’s Cal Spill Watch webpage.

On May 19, crude oil began spilling from an underground pipeline located above Highway 101 in Santa Barbara, CA. The spilled oil flowed underneath the highway, through a culvert, and into ocean waters near Refugio Beach. The owner of the pipeline, Plains All American Pipeline, estimates approximately 101,000 gallons of oil was released of which an estimated 21,000 gallons made its way into the Pacific Ocean before the pipeline was shut off. The pipeline – known as Line 901 – transports crude oil from the Las Flores Processing Facility (located approximately 15 miles west of the City of Santa Barbara) to Gaviota for transport further south. The cause of the spill is still under investigation.

Refugio and El Capitán state beaches were closed on May 20th and re-opened on June 26 at the discretion of the California State Park. Campgrounds in these areas were evacuated following the oil spill. A 23 mile by 6 mile area offshore was closed to fishing after the spill. The closure was lifted on June 29. 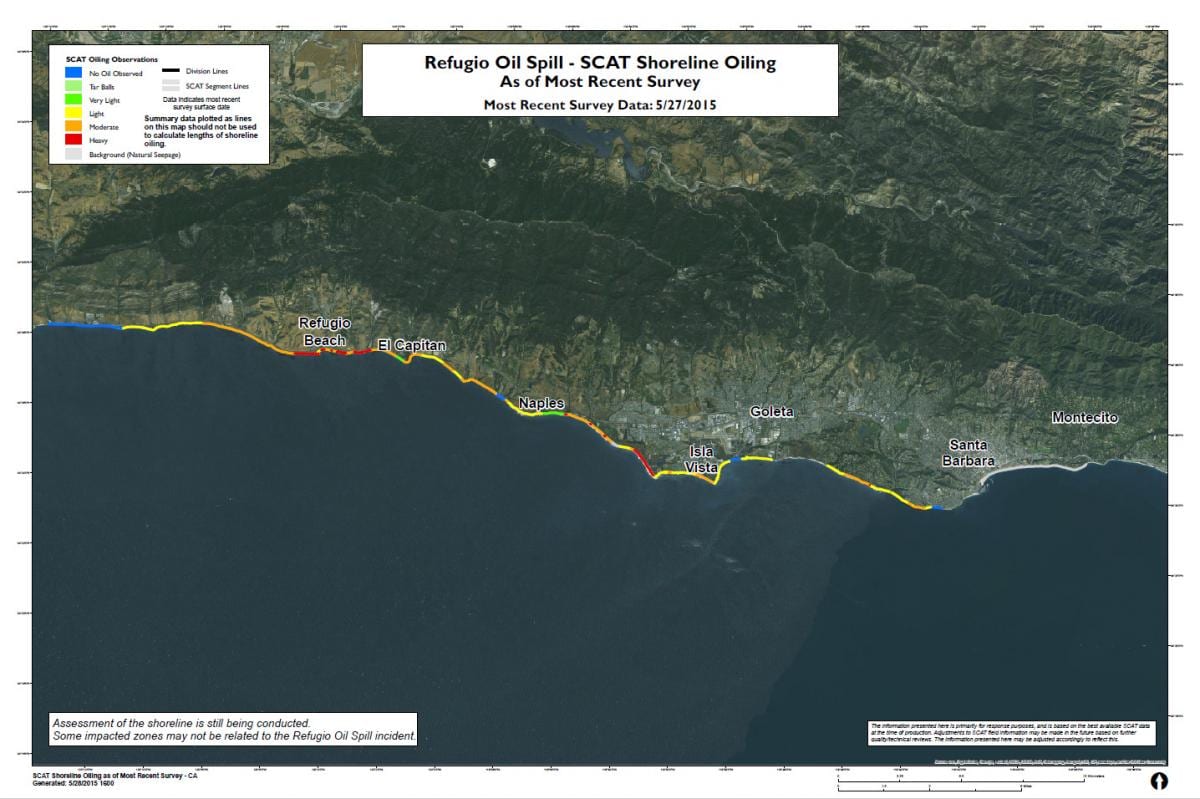 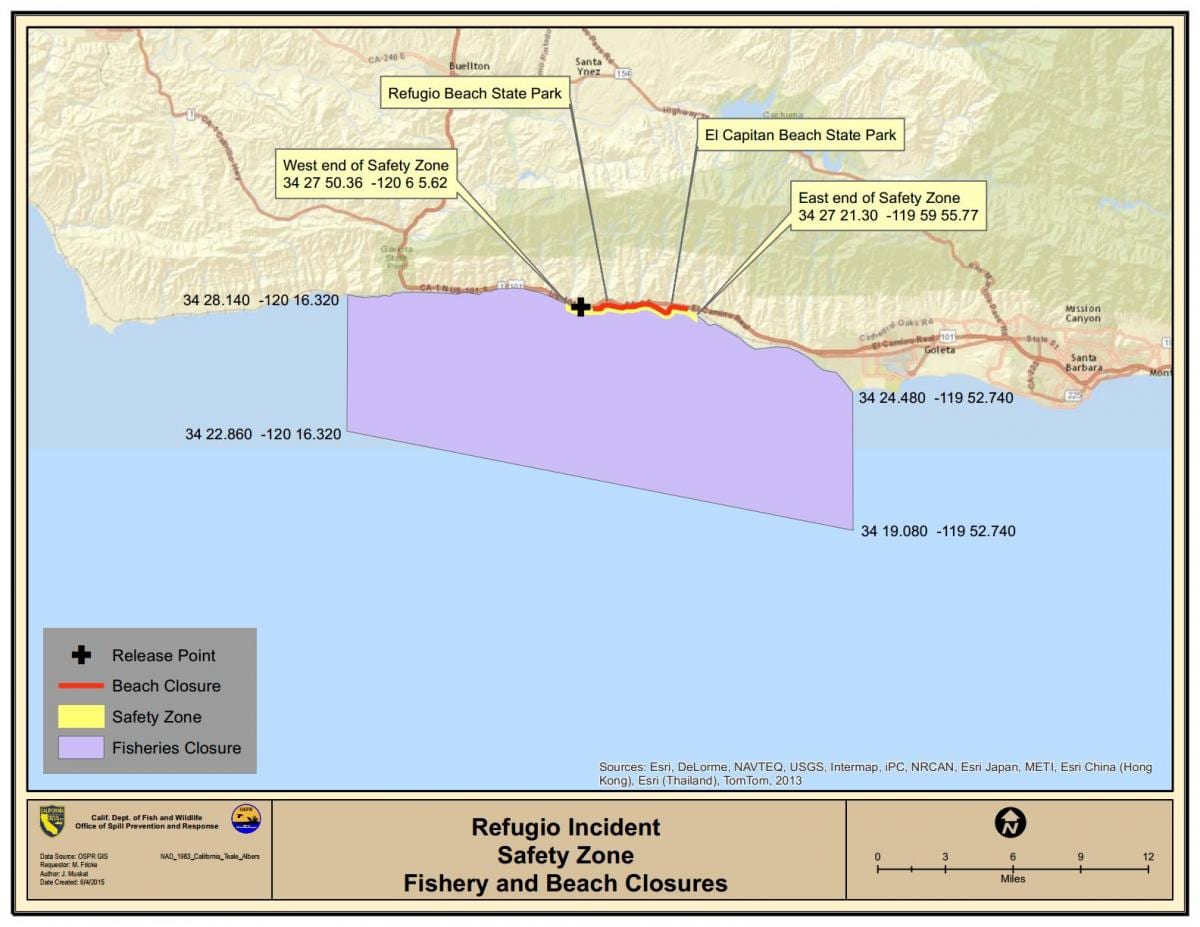 Caption: Canada de Alegria to Coal Oil Point fisheries still remain closed and a safety zone is currently in effect around the fisheries, which extends from west of Coal Oil Point to west of Gaviota State Beach.

The State of California has an Oil Spill Contingency Plan in place to respond to discharges of oil to all marine or inland surface waterways, and for oil spills on land. In addition, Area Contingency Plans (ACPs) are identified for geographic regions of the state. The ACPs identify ecologically sensitive areas and appropriate response mechanisms for each site should an oil spill occur. For example, within the affected area of the Refugio oil spill, 12 sensitive sites are identified in the ACP. The ACP for Southern California, which includes Santa Barbara, can be accessed here. The habitat types and extent of the fishery closure for the Refugio incident can also be viewed on the Environmental Response Management Application (ERMA) mapping tool here.

A Unified Command is established to respond to an oil spill and is led by a federal on-scene coordinator, a state on-scene coordinator, and the responsible party. The Unified Command for the Refugio oil spill includes representatives of the U. S. Coast Guard, the U. S. Environmental Protection Agency, Santa Ynez Chumash Tribe, Owl Clan Consultant (representing the three Clans: Barbareno, Coastal and Southern Owl), California Department of Fish and Wildlife, Santa Barbara County Office of Emergency Management, and Plains All American Pipeline.

An Incident Command Post was initially established at the Santa Barbara Emergency Operations Center to oversee the response and clean-up operations. It has since moved to Goleta.

While this oil spill introduced a new source of toxic oil to marine waters off California, waters off Santa Barbara do contain natural oil seeps. Natural seep activity in the eastern part of the spill area is being monitored. Samples of oil from the pipeline and from natural seeps have been collected and sent to a lab for fingerprinting. Each type of oil contains a unique fingerprint, or identity, which can help determine its origin. As clean-up efforts continue, oiled material that collects on beaches can be tested to identify if oil from the pipeline spill is continuing to wash ashore or if it is a result of natural seepage. 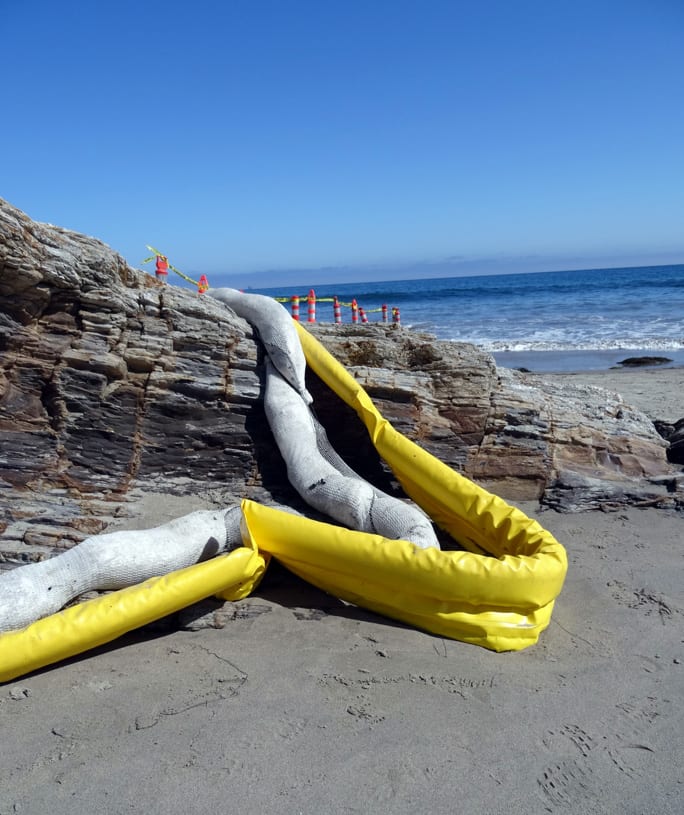 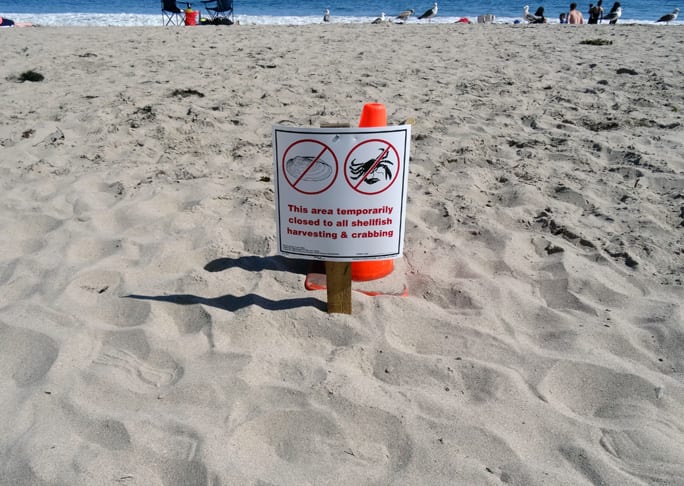 Unfortunately marine wildlife has been affected by the Refugio Oil Spill. Birds and marine mammals have been most notably affected, particularly Brown pelicans, California sea lions, Northern elephant seals, and dolphins. While many animals have been rescued for rehabilitation, many other have either been found dead or have died after being rescued as a result of the effects of oil exposure. Photographs have also shown fish and lobster mortality as a result of the oil spill, but the extent of fisheries damage is currently unknown.

Summaries of oiled wildlife rescues and mortality can be accessed on the Oiled Wildlife Care Network or Cal Spill Watch as available.

Tar balls were reported washing up on Los Angeles County beaches as early as May 28. Some scientists predict these tar balls were transported by ocean currents from the Santa Barbara oil spill and All Plains American Pipeline operated on the assumption that this was the case until fingerprinting confirmed whether the oil is linked to the Santa Barbara spill or is the result of another source. A separate Incident Command Post was established in the South Bay of Los Angeles and Orange Counties to respond to the pollution. On June 22, it was announced that the tar sample collected on Manhattan Beach in Los Angeles County matched the source sample taken from the Refugio Beach oil spill.

This unfortunate incident serves as a reminder of the risks associated with oil exploration, production, and transportation. The devastation of oil impacts are also evidenced by numerous accidents including the 1969 spill off the coast of Santa Barbara, the Exxon Valdez spill in Alaska (1989), the Cosco Busan oil spill in San Francisco Bay (2007), the Deepwater Horizon disaster in the Gulf of Mexico (2010) and many others that have greatly impacted marine wildlife, the economy, and even taken human lives.

Accidents can and do happen in all phases of oil extraction. Despite the best response efforts, once oil is spilled into the marine environment, there is no good way to clean it up.

How you can help: