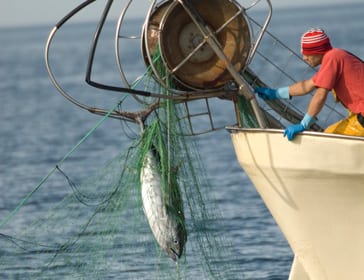 Seafood fraud creates a market for illegal fishing by making it easy to launder illegally caught seafood products. These fish typically come from vessels violating international conventions formed to prevent overfishing, deter destructive fishing practices and protect areas and animals in need of conservation. The U.S. may also be an easy target for dumping illegal, poor quality or unpopular seafood because import controls are few and far between.

2. All conservation measures are harmed by illegal fishing, and species at risk can be harmed by seafood fraud.

Illegal fishing undermines conservation measures by catching juvenile fish or more fish than the allowed quota, failing to comply with protective measures for endangered species, fishing during closed spawning seasons, in protected areas, or without a permit.

Incidental catches of prohibited species may be disguised. For example, swordfish labeled as from the U.S. fishery may actually have been caught by another fishery using more destructive and cheaper gear that catches many more threatened or endangered sea turtles.

Market-driven conservation efforts depend on the consumer’s ability to make an informed purchase of a particular species. For example, guides that advise on which species are most environmentally friendly to eat rely on the consumer being able to choose one species over another. This effort becomes impossible when fish are mislabeled. Because mislabeling maintains the appearance of a steady supply of popular fish species despite overfishing, the general public is unaware that the species is in serious trouble.