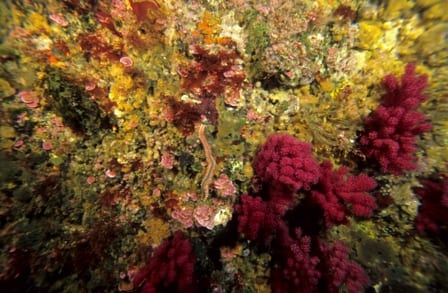 Deep-sea corals and sponges, some of the oldest animals on Earth, grow at the rate of just a few millimeters each year and live for thousands of years.

In recent years, NOAA and other scientific organizations worldwide have discovered that the majority of the coral species found in the world’s oceans live in deep or cold waters.

Deep-sea corals are typically found along continental margins, seamounts, undersea canyons and ridges. Some individual corals grow together to form small bushes or fans; others form larger colonies such as reefs or great trees. Sponges are single animals. Two thirds of all coral species are deep-sea corals.

Deep-sea corals and sponges are essential to the ocean’s health because they preserve ocean biodiversity and long-term sustainability of commercial and recreational fish species.

Deep-sea corals can form reefs and gardens that are essential to numerous oceanic species — including fish — by providing shelter, protection from strong currents and predators, nurseries for young fish, feeding, spawning and resting areas and breeding areas for a host of other marine life. They also provide important clues for the study of global climate change and are under study as sources of new biomedical compounds for medical treatment of disease.

Scientists know that deep-sea corals grow off every coast, from Maine to Texas, Alaska to California and around Hawaii. However, most of the deep-sea corals off the U.S. coasts have not even been located, let alone studied. They remain largely unprotected as a result.

Bottom trawls and dredges are especially threatening to sea coral communities found in deep ocean canyons and areas that lie along the continental shelf. Fishing in those places with bottom trawling gear will destroy millions of pounds of deep-sea coral and sponge that will take centuries to replace.

Scientific studies support fishermen’s observations that the disappearance of corals causes significant changes in the distribution of fish and other ocean wildlife.