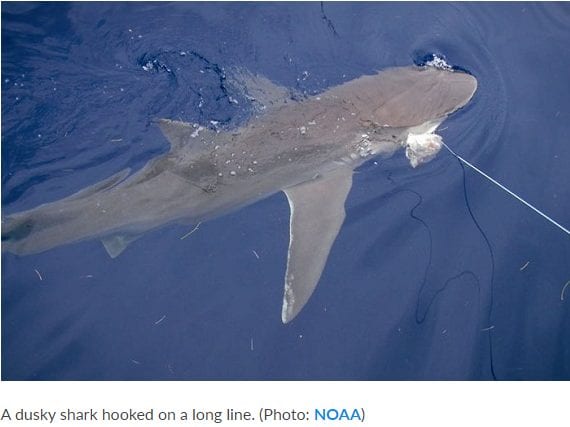 Dusky sharks, Carcharhinus obscurus, are in trouble. Populations off the Atlantic coast are estimated to have declined precipitously as a result of overfishing and bycatch, and the government has failed to take sufficient action to help populations recover. In 2000, the National Marine Fisheries Service (NMFS) prohibited fishermen from targeting dusky sharks, but because they did not account for bycatch, dusky sharks are still being overfished.

The 2016 stock assessment determined that the dusky shark population remains overfished and at low levels due to bycatch.  Scientists confirmed that the spawning stock biomass of the dusky shark had dropped by 81% since 1960—with only about 19% of the original spawning stock biomass remaining in 2015.  The assessment found that although the death rate of dusky sharks had declined since overfishing began in the 1980s, mortality from fishing still increased slightly in the most recent six years of the evaluation. Thus, the prohibition in 2000 did not effectively end overfishing.  The assessment concluded that the dusky shark population remained overfished and continued to experience overfishing as a result of bycatch.

To this day, the Fisheries Service has failed to limit the number of dusky sharks killed as bycatch, including in its most recent decision in April 2017, Amendment 5b to its management plan for dusky sharks.  Oceana brought a lawsuit in May 2017 and continues to push for the establishment of limits on bycatch as well as accountability measures that will give dusky sharks a chance to rebuild.

Oceana is determined to change the fate of dusky sharks and will continue its work to demand concrete measures to ensure that dusky shark populations are no longer overfished and will recover.