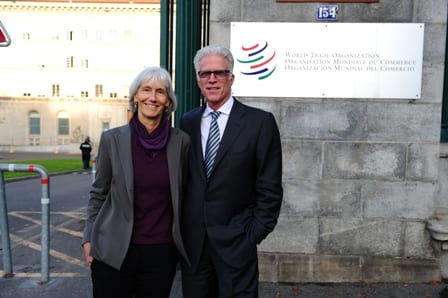 Fisheries experts joined together in Geneva to brief WTO delegates about the importance of global trade policy to assuring a future with sustainable seafood and healthy oceans. The delegation included award-winning actor and Oceana board member Ted Danson, Julie Packard, executive director of the Monterey Bay Aquarium and trustee of the David and Lucile Packard Foundation, and Michael Hirshfield, senior vice president for North America and chief scientist at Oceana.

Their presentations highlighted the current state of the world’s fisheries and the rise of the global sustainable seafood movement – a movement that has moved tens of millions of consumers to purchase sustainably caught seafood and convinced corporate giants, such as Wal-Mart, Compass Group and ARAMARK, to commit to sourcing sustainable seafood.

According to the United Nations Food and Agriculture Organization, more than 80 percent of the world’s fisheries are now overexploited, fully exploited, significantly depleted, or recovering from depletion. The leading force behind our oceans decline is our demand for seafood, says a new report by the Monterey Bay Aquarium, one of the world’s leading ocean institutions. Strong demand from developed countries, coupled with increasing affluence in developing regions, is expected to increase the demand for seafood by as much as 10 percent annually.

“Turning the Tide”, Report by the Monterey Bay Aquarium

“The State of the World’s Fisheries”, Presentation by Michael Hirshfield