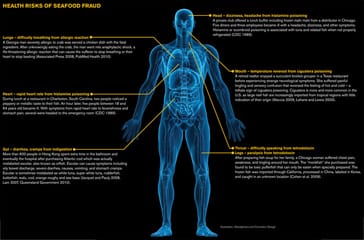 In some cases, seafood fraud can directly threaten human health. Seafood in general is extremely sensitive to proper handling and refrigeration, and in some cases can cause severe illness if not handled properly. Swapping one fish species for another that may be riddled with contaminants, toxins or allergens can make people sick.

Globalization of our food supply brings a much wider variety of seafood to U.S. tables than in the past. When seafood is mislabeled, a broader array of potential contaminants, pathogens, and allergens may be covered up.

One health concern is ciguatera, which formerly occurred primarily in tropical regions, but is now increasingly imported along with the large reef fish that carry this form of food poisoning. Ciguatera can last for weeks or even months, with symptoms including nausea, diarrhea, numbness, blurred vision and even reverse temperature sensation — where hot feels cold and vice versa. Ciguatera can be debilitating, with severe neurologic symptoms, and may recur throughout a person’s life.

Selling farmed fish as wild or vice versa can result in different and potentially higher health risks for consumers. For example, fish raised in aquaculture pens can carry antibiotics and dyes that would not be present in wild fish. In some cases, much higher levels of certain contaminants are found in farmed salmon. The use of antibiotics in aquaculture can also lead to the spread of drug-resistant bacteria in species such as catfish.

Allergens may be the most life-threatening risk of seafood fraud. Fish and shellfish are among the most common food allergies in the U.S., along with peanuts and tree nuts. Failure to declare potential allergens involving shellfish, shrimp, and other species is considered an emerging problem for public health.

These are not theoretical threats. For example, Oceana’s studies found tilefish mislabeled as red snapper and halibut in New York City, and king mackerel mislabeled as grouper in South Florida. These are two types of fish that are on the FDA’s Do-Not-Eat list for sensitive groups such as pregnant women and children because of their high mercury content.

For real-life examples of the health consequences of seafood fraud, click to enlarge the graphic above.