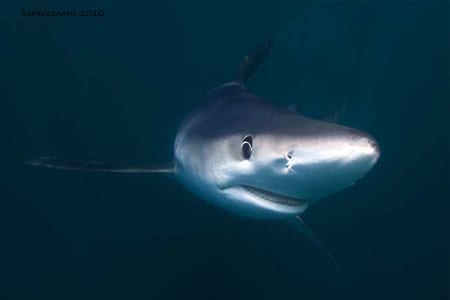 Oceana is working to establish a science-based and sustainable management of the species ICCAT oversees, specifically bluefin tuna, sharks and swordfish.

Bluefin tuna, a highly sought-after fish for sushi, is in danger of extinction as a result of overfishing. Following the Deepwater Horizon oil spill in the Gulf of Mexico, an important spawning ground for bluefin tuna, a precautionary approach is more important than ever before.

Oceana is working to prohibit the capture of endangered and vulnerable shark species, including silky sharks, porbeagle, longfin mako and common thresher sharks. We are also working to establish science-based, precautionary catch limits for other commonly caught shark species in ICCAT fisheries, including shortfin mako and blue sharks, and to require sharks to be landed whole, with their fins still naturally attached.

Learn more by reading our fact sheets about shark management and shark finning at ICCAT.

Oceana is working to put in place a swordfish management plan in Mediterranean that will ensure the recovery of the stock to the levels of the 1980s.

Sea turtles are often caught as bycatch in ICCAT fisheries. Oceana is pushing ICCAT should to put measures in place that reduce the capture and injury of threatened and endangered sea turtles.