Fish farming is an ancient industry that has become increasingly sophisticated in recent years. A huge global demand for seafood has made fish farming, or aquaculture, the world’s fastest-growing food industry. Nearly half of all seafood is farmed, and that number is rising every year.

But many forms of aquaculture are assailed by conservationists for being too hard on the marine environment. The quest for truly sustainable aquaculture has led to some interest­ing technological developments in recent years. 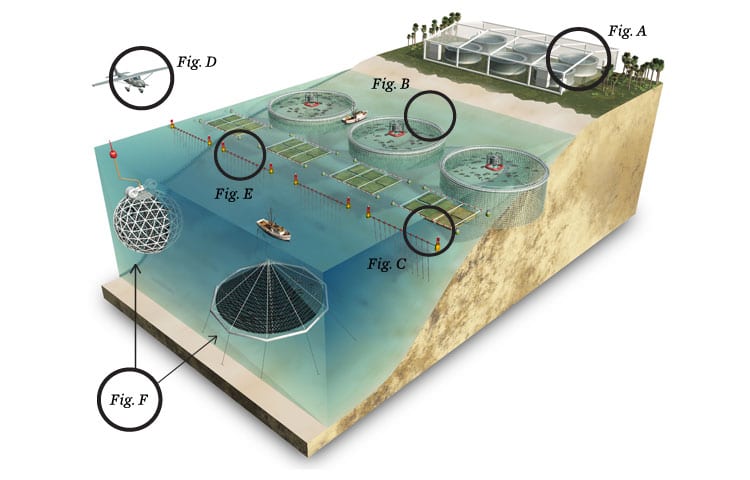 ONSHORE PONDS (Fig. A): Onshore fish farms can be among the most sustainable types of aquaculture, as the self-contained systems don’t pollute a marine environment. Tilapia and catfish are among the species of seafood raised this way.

SALMON PENS (Fig. B): Open-water pens typically hold salmon, which are among the world’s most popular farmed fish species. These pens can be up to 90 feet (about 27 meters) across and 60 feet (about 18 meters) deep and hold an average of 50,000 salmon. Located in cold, coastal areas like Chile, Norway, and British Columbia, salmon pens can wreak havoc on native ecosystems with pollution and disease.

SEAWEED FLATS (Fig. C): Seaweed farming is a common practice in the Philippines and has grown in popularity around the world. These floating rafts are usually com­prised of a 10-by-10-foot (3-by-3-meter) wooden frame with seaweed seedlings tied to a net of ropes. The estab­lishment of seaweed farms can help protect marine eco­systems because seaweed thrives in healthy, clean waters. Carrageenan, a gelatinous extract made from the dried seaweed, is a component of an incredible array of goods from toothpaste to beer.

SPOTTER PLANES (Fig. D): Small aircraft are often used to spot large schools of fish or migrating big fish like bluefin tuna. In the case of bluefin tuna, the pilots radio the fish’s location to boats on the water, which use purse seine nets to round up the tuna. The tuna are kept in offshore pens similar to the ones used to raise salmon in a process known as tuna ranching. The young tuna fatten up for a couple of months before they are sent to market. Spotter planes are illegal in many places, but they are often still used.

SHELLFISH CULTIVATION (Fig. E): Oysters and mussels can be cultivated in a number of ways. One method in­cludes attaching the juvenile shellfish to hanging nylon ropes and allowing them to grow large enough to harvest. Thanks to oysters’ and mussels’ water filtration and low energy needs, this is one of the most sustainable types of aquaculture.

THE WAVE OF THE FUTURE (Fig. F): New technology is pushing the boundaries of what has been possible for fish farming so far. Free-floating spheres made of galvanized steel wire mesh can be moved from place to place and thus may reduce fish waste pollution in concentrated areas. And underwater pens tended by support boats may put fish farms in previously off-limits waters.