Far beneath the ocean’s surface, whole submerged mountain chains, called seamounts, have yet to be explored. Sea­mounts were mostly ignored by scientists until the 1980s, when fisherman began pulling up huge catches of orange roughy from some in the southern Pacific.

Until then, sea­mounts were thought to be barren and scientifically unin­teresting. We have only just begun to understand their ecological significance. 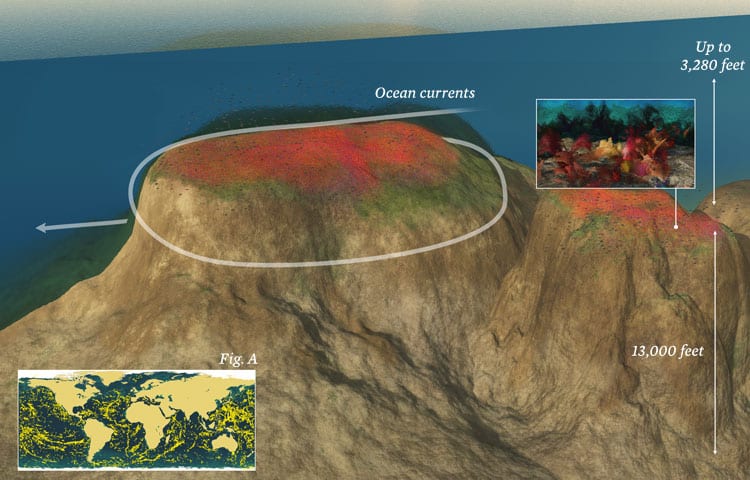 These underwater mountains can rise as high as about 13,000 feet (4,000 meters) above the seafloor, nearly as tall as the highest peaks in the Rocky Mountains in the west­ern United States. They are home to an incredible variety of marine life that scientists have just started to quantify. Only a thousand of the estimated thirty to fifty thousand sea­mounts in the Pacific have even been named.

But like terrestrial mountains that are cut apart by strip mining or have their tops removed, seamounts can be de­stroyed by industrial activity. Trawling for seafood species such as orange roughy can destroy the unique ecology of the seamount before it’s even been discovered.

• (Fig. A) Only a small percentage of seamounts have been mapped, but scientists estimate that the Pacific Ocean alone contains 30 to 50,000 seamounts above 3,280 feet (1,000 meters) tall. If you add smaller sea­mounts, the number jumps to 600,000 to 1.5 million sea­mounts. The Pacific’s volcanic Ring of Fire is the most likely place to find large seamounts.

• Seamounts are extinct volcanoes rising abruptly from the ocean floor. If they break the water’s surface, they become volcanic islands like Hawaii. The tallest seamounts can top 13,000 feet (4,000 meters) and still be 3,280 feet (1,000 meters) or more underwater.