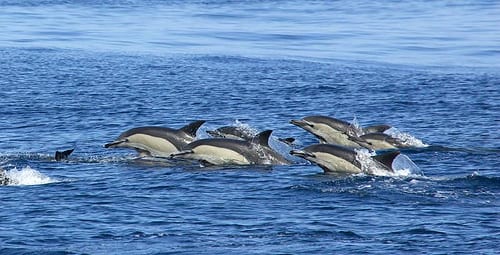 1. As mammals, dolphins are warm-blooded. Unlike fish, who breathe through gills, dolphins breathe air using lungs. As a result, they must make frequent trips to the surface of the water to breathe.

2. Dolphins find prey by using echolocation, and they also use whistles, clicks and squeaks to communicate.

3. Bottlenose dolphins frequently ride the bow-waves of ships and body-surf on breaking waves.

4. The common dolphin is highly active and acrobatic, and is among the fastest swimmers of all cetaceans, with a top speed of about 25 mph.

5. Despite its name, the killer whale, also known as the orca, is the largest member of the dolphin family.

6.  The long-snouted spinner dolphin gets its name from its habit of leaping out of the water and then spinning around up to seven times before splashing back into the sea.

7. The skin of the Risso’s dolphin often appears scarred, which is due to fights between rivals and to encounters with squid, which make up a large proportion of its prey.

8. The Indo-Pacific humpback dolphin gets its name from the conspicuous hump beneath its dorsal fin.