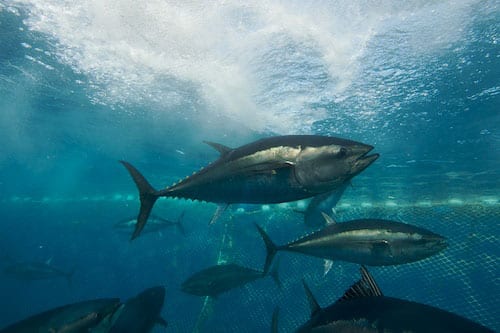 The Mediterranean is very biologically diverse and was recognized as one of the first Global Biodiversity Hotspots.

Accounting for only 0.8 percent of the world’s ocean area, the Mediterranean contains 18 percent of all described marine species, of which 25 to 30 percent are found no where else in the world.

The area is home to 21 species of marine mammals, 750 species of fish, 5 species of sea turtles and over 360 species of breeding birds. A total of 10,000 to 12,000 marine species have been recorded in the Mediterranean Sea.

The Mediterranean Sea represents a vast feeding ground and spawning ground for many fish species. Eastern Atlantic bluefin tuna spawn in the Mediterranean with several locations observed to be particularly important to their survival, including the Balearic Islands.

For marine mammals, disease and pollution greatly threatens many populations. The once common harbor porpoise is now considered endangered by the International Union for Conservation of Nature (IUCN).

In the Eastern Ionian Sea, 40 percent of Mediterranean bottlenose dolphins have been found to be visibly starving. Similarly, short-beaked common dolphins were once abundant and now are found in a relatively small area, with starvation and disease resulting in mass mortality events.