The Northern Bering Sea and Bering Strait region in Alaska is one of the most historically, environmentally and culturally significant places on our planet. It is home to one of the largest marine mammal migrations in the world, as millions of animals, including beluga and bowhead whales, walruses, and seals, travel through the funnel of the Bering Strait every year on their way to and from feeding and breeding grounds in the Arctic. Millions of seabirds, from multiple continents, make their way to the Arctic each spring to take advantage of the seasonal burst of productivity which also supports invertebrates and fish.

This katawhsaqa, or “pouring out” in the St. Lawrence Island Yupik language, also makes the northern Bering Sea and Bering Strait region critically important to culture and food security of the Yup’ik, Cup’ik and Inupiaq people who have relied on these rich resources for millennia. The people here live a traditional subsistence way of life that is inextricably tied to the health of the marine ecosystem.

Climate change and the rapid depletion of sea ice in the Arctic Ocean are altering the ecology of the area, as the ice melts earlier in the year and freezes later. This loss of sea ice threatens hunting and fishing opportunities and overall food security for the Alaska Native tribes who depend on the abundant resources of the region. At the same time, the region which is ice-free for longer periods than ever, is increasingly vulnerable to threats from increased shipping, expanded industrial fisheries, and offshore oil and gas development. These stresses, combined with the existing threats from climate change, place the people, the animals, and this unique ecosystem at grave risk.

On his first day in office in January of 2021, President Biden issued an Executive Order that restored the Northern Bering Sea Climate Research Area and reinstated Preisdent Obama’s Executive Order outlined below. 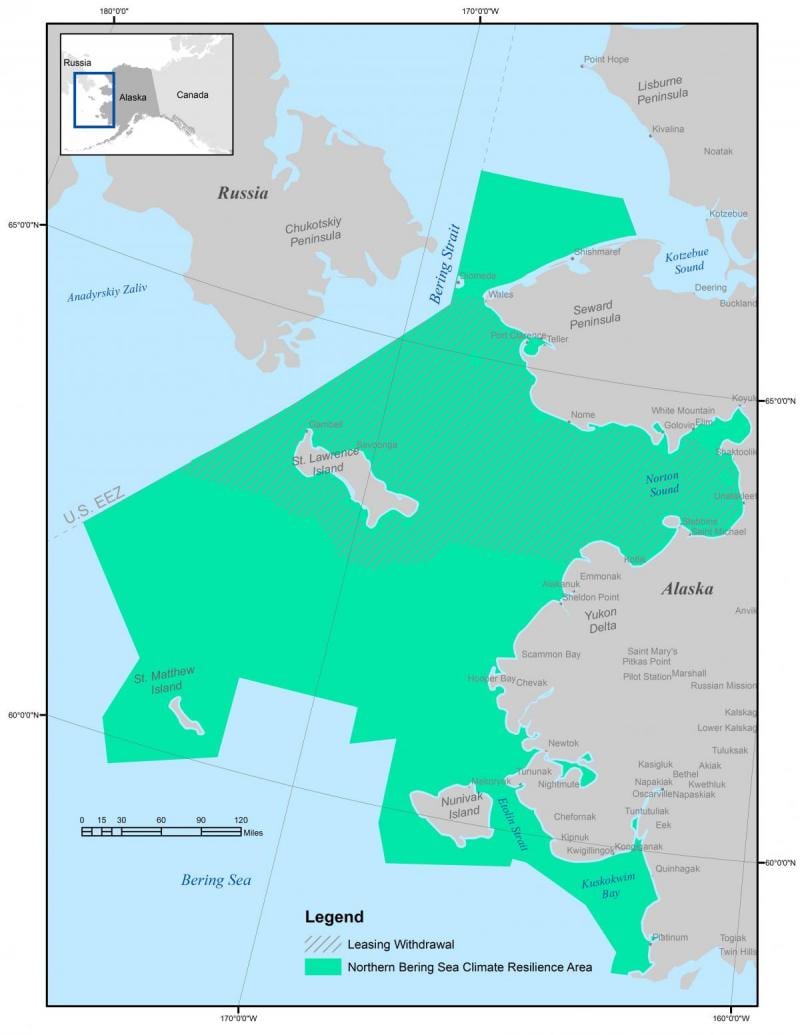 The Bering Strait Marine Life and Subsistence Data Synthesis depicts areas of importance and high abundance for marine species, such as ice seals, walrus, polar bears and whales, as well as other marine ecosystem components like benthic habitat and sea ice. This synthesis uses both western science and Indigenous Knowledge to create a synthesis that decision makers can use to help protect valuable and vulnerable marine areas from human threats such as shipping, and large-scale commercial fishing. The synthesis is the result of a multi-year collaboration between Kawerak, Inc. and Oceana.