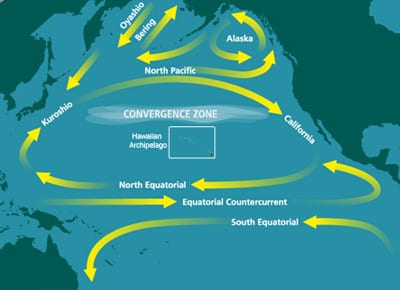 The Pacific Garbage Patch is the world’s largest, though not its only, area of marine debris concentration. The patch sits within the 9 million square mile North Pacific Subtropical Gyre, an enormous swirling expanse of ocean that represents the convergence of four major currents that draw in trash from as far away as the coasts of the United States and Japan.

Figures for the size of the patch itself vary, but some researchers estimate it to be about the size of Texas and extending well beneath the ocean surface. The patch was discovered in 1997 by Charles Moore, a competitive sailor who was returning home to California after a race in Hawaii, but its existence was predicted as early as 1988 by oceanographers at NOAA.

While popular descriptions of the patch often characterize it as a raft-like swath of bottles and fishing gear, much of the patch is, in fact, barely visible to the naked eye—the reason being that much of the plastic debris has been broken apart into tiny fragments.

However, not all plastic floats and there is no estimate of the amount of plastic on the seafloor or what effect it could have on benthic life, but in the cold, oxygen-poor environment of the deep sea plastic can essentially last forever.

Where does it come from?

The majority of plastic marine debris comes from land-based sources. These sources include everything from beachgoers leaving trash on the beach to storm-drain runoff and sewage overflows that carry street litter into the sea. At-sea sources of marine debris include fishing gear and waste from boats that is either accidentally or deliberately dumped into the ocean. Oceana has worked successfully to reduce the amount of waste that cruise ships dump into the ocean.