Climate change will rule the headlines from now through December, when delegations from nearly 200 countries will convene in Copenhagen, Denmark for the United Nations Climate Change Conference. With just over a month to go to strike an international agreement to contain global carbon emissions, countries are moving negotiating positions around like pieces on a chess board.

One issue that is not negotiable, unfortunately, is the reality of ocean acidification and its direct link to carbon emissions. As carbon emissions increase – as they are at a rate of about 3 percent annually – our sea water turns more and more acid, making the process of shell-building for mollusks, lobsters and corals more and more difficult.

This photograph shows how a change in the pH – the acidity – of our oceans affects the tiny creatures that form the base of the food chain for so many marine animals. When you understand that these particular creatures – pteropods – form almost half the diet of Alaskan pink salmon, you begin to understand how urgent it is to reverse ocean acidification. Experts predict that by mid-century we may begin to see a mass extinction of coral reefs if we do not act now to reverse ocean acidification.

That is where smart, focused ocean advocacy comes in. Oceana is widely seen as the leading voice on ocean acidification. For Oceana’s voice to be heard in Copenhagen, our scientists and campaign directors need to be on site, at the table, in the streets.

A contribution now to Oceana’s Climate and Energy Campaign would help us carry the flag on ocean acidification all the way to Copenhagen.

With your support, Oceana can be a vocal advocate for a carbon-cutting strategy we know will help the oceans. The Copenhagen agreement must:

As developed and developing countries alike belch out more and more carbon emissions, this is really the only road to take to avert climate meltdown.

Scientists agree that widespread and permanent extinction of coral reefs will occur by the middle to end of this century if CO2 is allowed to reach 450 ppm or higher. We are now at 387 ppm and climbing all the time.

How urgent are these numbers? It is true the oceans have always acted as the ‘lungs of the planet,’ absorbing excess CO2 to stabilize our climate.

As a loyal Oceana supporter you know our campaign strategy to cut carbon levels in order to save the oceans is based on sound science and economics.

The chart below shows where emissions are headed with no or little intervention, as well as where they need to go to reverse ocean acidification. Our role in Copenhagen will be to push nations to forge a post-Kyoto climate agreement based upon a commitment to bring atmospheric levels of carbon dioxide below 350 parts per million if we are to have any hope of averting climate catastrophe. 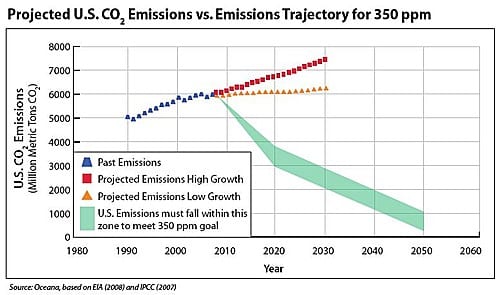 I know it is a dire picture. Scientists are already seeing the impacts of ocean acidification – from decreasing growth rates of corals in the Great Barrier Reef to massive coral bleaching events across the tropics. I also know that we can reduce carbon output, and that oceans must be part of the solution. As Oceana board member Sam Waterston recently wrote for the Miami Herald:

“Carbon dioxide in the sea is the front line of climate change. Reverse the trend toward ocean acidification, and we will have made a giant stride in addressing the impacts of climate change. The sea is warning us to change course and calling us to seize enormous opportunities. Now.” Sam Waterston, Oceana Board Member, The Miami Herald, July 2009.

So, what are these opportunities? With your help, Oceana can put some real juice behind our climate campaign to:

Simply put, the United States must lead on these and other climate policies when countries meet in Copenhagen in December. With time running out on the Kyoto Protocol, the U.S. must prove to developing countries like China, India and Brazil it is serious about climate change.

During the Copenhagen climate talks, Oceana can help bend global attention on climate to the state of our oceans. By highlighting the oceans’ role as a global source of protein and the economic driver for millions, we think we can get their attention.

But we need your help. Can we count on your support again? A gift of $1,000 at this time could help us send a solid delegation to Copenhagen and be a strong voice for the oceans. Please give generously to Oceana’s Climate and Energy Campaign.

P.S. I know this is a sobering message to hear, but with close to three-fourths of the planet at stake, I know I can count on your help. If not now, when?

Oceana will hold its 2009 annual membership teleconference on:

Then enter the meeting number: *4457406*
For more information, please contact us.