Northern anchovy are small, schooling, pelagic forage fish found along the Pacific coast from Baja California to British Columbia—an area called the California Current. Fishery managers divide Northern anchovy into three “subpopulations”: the northern off Oregon and Washington, the central off California and northern Mexico, and the southern in Mexico.  Anchovies generally move offshore in winter and are abundant nearshore, in bays and estuaries in the spring, summer and fall. Like other forage species, anchovy populations undergo wide fluctuations, exhibiting cycles of booms and busts.  From 2009-2015 anchovy populations collapsed, and now they appear to be on the rise.

Northern anchovy are also vitally important to supporting a healthy food web. An extensive list of marine fish, birds, and mammals in the California Current region depend on these forage fish as prey. In particular, brown pelican reproductive success is associated with the abundance and availability of Northern anchovy, which in some years makes up over 92 percent of their diet. From 2010-2015, brown pelicans unfortunately experienced unprecedented reproductive failures due largely to the decline of anchovies and other forage fish. The seasonal diets of Chinook salmon can in some years be over 90 percent anchovy. Northern anchovy also ranks among the first and second most important food source for humpback whales, dolphins, and sea lions. Federal scientists recently determined that the unavailability of sardines and anchovies was the root cause of the Unusual Mortality Event declared by NOAA which left thousands of California sea lions stranded on beaches, malnourished and dehydrated, from 2013-2016.

Historically, the National Marine Fisheries Service (Fisheries Service) regularly assessed anchovy off California to ensure that catch levels leave enough of this little fish in the ocean to support its predators. This management regime was replaced by fishery managers in 1998 and Northern anchovy stocks have not been formally assessed since 1995. A published population estimate of the central (California) subpopulation of northern anchovy from 2009-2011 indicated a population as low as 15,000 metric tons (mt). A recent update puts the seven year average (2009-2015) population size at 20,700 mt. Additionally, federal scientists estimated the 2015 stock size at 31,427 mt based on acoustic trawl surveys, and more recent surveys indicate the stock has increased since then.

On June 28, 2019, Oceana, represented by Earthjustice, filed a lawsuit against the National Marine Fisheries Service for its continued failure to prevent overfishing, use the best available science or account for the food needs of ocean animals in managing anchovy—a species critical for feeding ocean wildlife off the West Coast. The lawsuit was filed in response to a final rule issued in May 2019 by the Fisheries Service. The rule established a multi-year, unchanging catch limit for anchovy that does not account for the frequent, and sometimes rapid, cycles of booms and busts in the size of this population. The final rule is a near carbon copy of an earlier proposal by the Fisheries Service in 2016 that was struck down in court because it did not use best available science and did not prevent overfishing.

Below is a legal timeline:

Oceana is urging the Pacific Fishery Management Council—a 14-member voting body that provides recommendations to the Fisheries Service— to actively manage Northern anchovy by establishing an annual management approach that sets annual catch limits based on the current estimates of abundance from acoustic trawl surveys that would prevent overfishing and ensure sufficient food for ocean wildlife in the future. 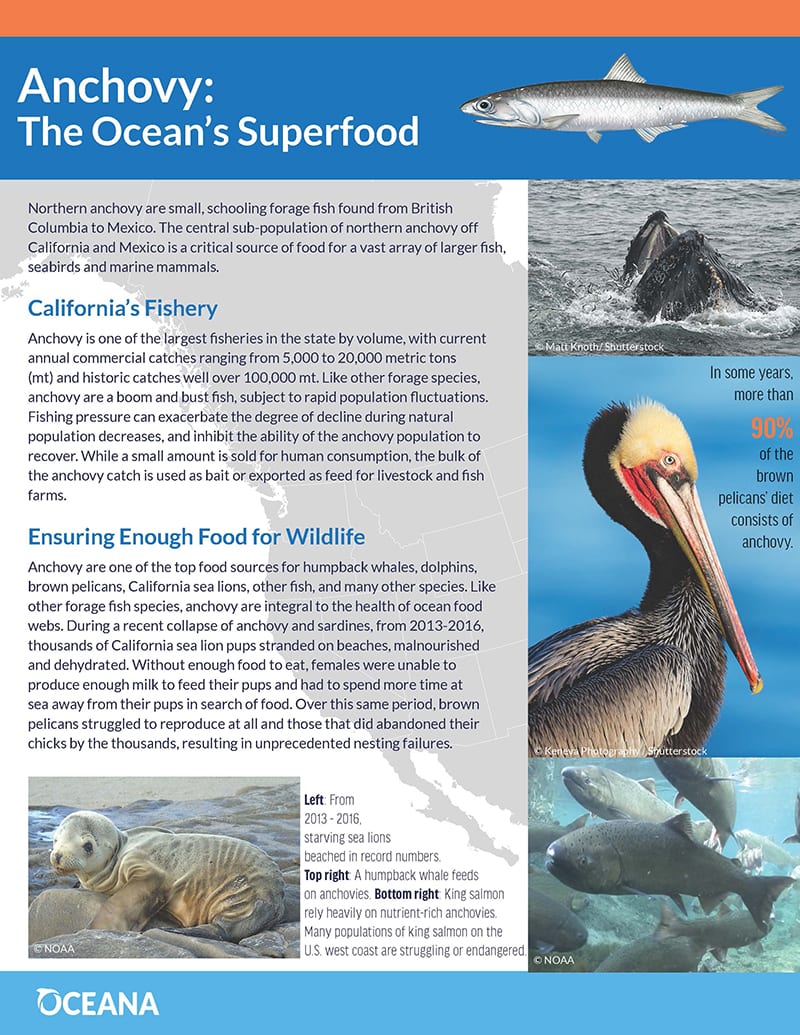