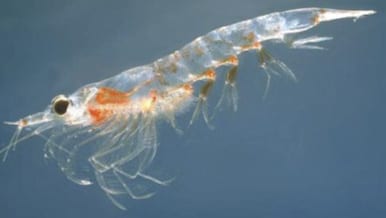 Forage species— small, schooling, nutrient-rich fish, crustaceans, and squid—are the foundation for healthy and productive oceans. Abundant populations of forage species are vital to the health of the ocean ecosystem off of Washington, Oregon, and California and to the sustainability of economically and culturally important fisheries. Oceana works to protect the ocean’s tiny fish in this diverse marine ecosystem by advancing the sustainable management of existing forage fish fisheries for species like Pacific herring, Northern anchovy and Pacific sardine while preventing the development of new forage fish fisheries for ‘”unmanaged” and presently “unfished” forage species like krill, Pacific sandlance and smelts. Since 2005 we have worked to protect all species of krill, myctophids, Pacific saury, smelts and many other forage species from the development of new commercial fisheries in the California Current ecosystem off the U.S. West Coast unless there is data and information to show such fisheries won’t adversely affect the ocean ecosystem.

Krill are tiny shrimp-like crustaceans found in all of the world’s oceans. Many fish species, such as salmon, rockfish, hake, and flatfish depend on krill directly or indirectly and support important recreational and commercial marine fisheries. In fact it’s krill that makes the meat of wild salmon healthy and pink. Krill are also a critical food source for the ocean’s most majestic marine mammals. One blue whale can eat as much as four tons of krill in one day!

In some areas around the world, krill are harvested to feed farmed fish, removing a food source from the wild fish and animals that depend on krill as part of their diet. Acknowledging the critical role that krill plays in supporting a healthy ocean ecosystem, central California marine sanctuary managers approached the Pacific Fishery Management Council (PFMC) in 2004 requesting a ban on krill harvest in certain National Marine Sanctuary waters. When the PFMC initially did not select a management measure that would prohibit krill harvest, Oceana engaged and was the successful catalyst in getting the PFMC to prohibit the harvest of all krill species in all ocean waters off the U.S. West Coast.

The ban on krill harvest went into effect in 2009. This conservation success was a five year effort working on all fronts of science, policy, law and the public to see it through. The ban in federal waters added upon krill protections already in place in Alaska’s state and federal waters, as well as prohibitions on directed harvest of krill in California, Oregon and Washington state waters. So, krill are now protected from shore to 200 nautical miles off the U.S. West Coast.

The success and precedent of taking precautionary action to prohibit fishing for krill, before a fishery started, launched Oceana into a multi-year dedicated campaign to protect other species of forage fish that are not currently managed, but for which a targeted fishery could develop in the future.

Oceana worked with the Pacific Fishery Management Council on its first ever Fishery Ecosystem Plan, which it adopted in April 2013, as a way to advance ecosystem science and fishery conservation. The heart of the Fishery Ecosystem Plan is a series of “Ecosystem Initiatives,” the first of which was to prohibit development of new commercial fisheries for forage species in federal ocean waters offshore Washington, Oregon and California.

In April 2014, the Council identified a list of seven groups of forage fish to be prohibited from the development of new commercial fisheries: round and thread herring, mesopelagic fishes, Pacific sand lance, Pacific saury, Silversides, Osmerid smelts, and pelagic squids (other than Humboldt squid). These seven groups include hundreds of important forage species in the California Current Ecosystem and the protections received across-the-board support from environmental groups and members of the fishing industry alike. The federal fishery council took final action in March 2015 to prohibit development of new commercial fisheries for these forage species in all federal ocean waters offshore Washington, Oregon and California (3-200 nautical miles). Then, the National Marine Fisheries Service made those protections final in May of 2016.

Simultaneously, in 2012 we worked with the California Fish and Game Commission and other stakeholders to adopt a new state policy to manage California’s forage fisheries that officially recognizes the inordinately important role forage fish play in supporting healthy oceans. This policy establishes a new direction for fisheries on forage fish by considering how much to leave in the ocean to support the ecological, economic and social values forage fish provide beyond their value in the fishing net. In working with the state and stakeholders to implement this policy, the Department of Fish and Wildlife issued regulations on April 15, 2017 that established protections for forage fish in California state waters parallel to the federal action.

The Washington Department of Fish and Wildlife adopted a forage fish plan and policy in 1998 that commits to maintaining healthy populations of forage species and sets a precautionary approach to forage fish fishery management and actions to identify and protect forage fish spawning habitat.

Little fish make a big difference. Off the West Coast of the United States, fisheries managers have adopted a precautionary approach to protect more than two-thirds of the forage fish base by weight. This in turn, helps to feed the ocean and maintain a healthy food web and ocean ecosystem.