The following actions are needed to protect forage fish:

New policies must be established that recognize, account for, prioritize, and protect the important role forage species play in the marine ecosystem, maintaining the long-term health of the food web

The most conservative approach to protecting forage species is to ban commercial fishing on these species before they begin. The National Marine Fisheries Service and the Pacific Fishery Management Council have already done this for krill, a tiny shrimp-like animal off the U.S. West Coast. In March 2015, the Council voted to prohibit development of new commercial fisheries for seven groups (representing hundreds of species) of forage fish along the U.S. West Coast, including smelts, pelagic squids, and myctophid lanternfish, unless and until it can be shown fishing can occur without causing harm to the ecosystem. These protections became final in April 2016. Also in 2016, the Oregon Department of Fish and Wildlife approved prohibitions on directed commercial fishing for currently unmanaged forage species in state waters (0-3 miles), parallel to the action the Pacific Fishery Management Council took. These forage fish protections in Oregon’s ocean waters and bays took effect on January 1, 2017. On April 15, 2017 the State of California put regulations in place to prohibit new fisheries from developing on certain species of forage fish from zero to three miles unless and until it can be demonstrated these critical fish can be caught without causing harm to the ecosystem. With similar regulations in place in Washington and Oregon state waters (0-3 miles) and in federal waters coast-wide (3-200 miles), this action by California is the last piece of the puzzle completing sweeping protections that now apply to all U.S. ocean waters on the West Coast from shore out to 200 miles. The Washington Department of Fish and Wildlife adopted a forage fish plan and policy in 1998 that commits to maintaining healthy populations of forage species in its state waters.

Each forage species targeted by commercial fisheries must be managed using an Ecologically Sustainable Yield approach where all the impacts of fishing are considered when managing each fishery. Looking at ecosystem-wide effects, and considering the health of the entire forage fish assemblage when setting catch levels for individual species will ensure sufficient abundance of forage species for the ecosystem including fish, invertebrates, seabirds, marine mammals and other marine life when calculating appropriate catch levels.

West Coast states must identify and protect forage fish spawning habitats from development. Moreover, the National Marine Fisheries Service must identify and designate critical habitat for the threatened eulachon smelt in all of its key habitats – including ocean waters – where these fish spend the vast majority of their lives.

Most forage species are sold as low value products such as feed for aquaculture and bait. As a result, the fishing industry currently has an incentive to maximize harvest levels in a “low value, high volume” business model. Rather than removing forage species from the ocean ecosystem and exporting them to low value international markets, we should leave more in the ocean and promote higher value domestic markets such as those for direct human consumption.  If more people ate forage fish rather than farmed fish that are fed the forage fish, we could feed more people while reducing ecosystem impacts.

More research should be conducted on predator-prey relationships to help managers account for predator needs when setting catch levels. It is also important to consider long-term natural oceanographic changes as well as human-induced changes like climate change and the impacts of ocean acidification when managing forage fisheries.

Aquaculture is the farming of aquatic organisms in nets or pens such as salmon and bluefin tuna. These fish are often fed fishmeal, which is ground up, wild caught forage fish like sardines and anchovy. For several decades, 20 million to 30 million metric tons of fish (1/4 to 1/3 of the global fish catch) have been removed from the marine food web each year to produce fishmeal and fish oil for animal feeds and other industrial purposes. In 2002, 46% of fishmeal and fish oil produced globally was used for aquaculture, followed by 24% for pigs, and 22% for poultry. Despite improvements in feed efficiency, overall demand, particularly for fish oil, is increasing due to the expansion of aquaculture production. 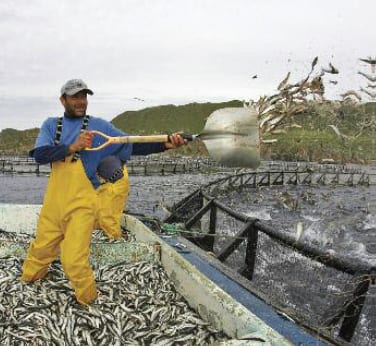 Catch levels are pre-determined amounts of fish (usually measured in metric tons) that each fishery is allowed to take in a fishing season. Fishery managers typically do not consider how much prey needs to be left in the ocean to support other valuable fisheries and wildlife. Instead, managers use the traditional single-species approach to managing forage species, evaluating each fish species in isolation and determining what catch levels most likely would allow humans to continue to catch that same amount of fish or more in future years. Every major report on ocean management in recent years came to the same conclusion: we need to move away from this single-species “money fish” model to an ecosystem approach that accounts for the needs of other components of the ecosystem, like predators, when setting catch levels. This holistic approach to fishery management is called ecosystem-based fishery management.

Forage species have value if they are caught, but they are also valuable if we leave them in the ocean, as they increase the value of other commercial and recreational fisheries, provide more abundant wildlife and associated tourism, and lead to a more healthy, resilient marine ecosystem.  A report released by the Lenfest Forage Fish Task Force says that globally forage fish have a higher economic value left in the water as prey than in the net. The Task Force concluded that the direct value of global forage fish catch is $5.6 billion; however, the supportive value of forage fish to other commercial catch is $11.3 billion.