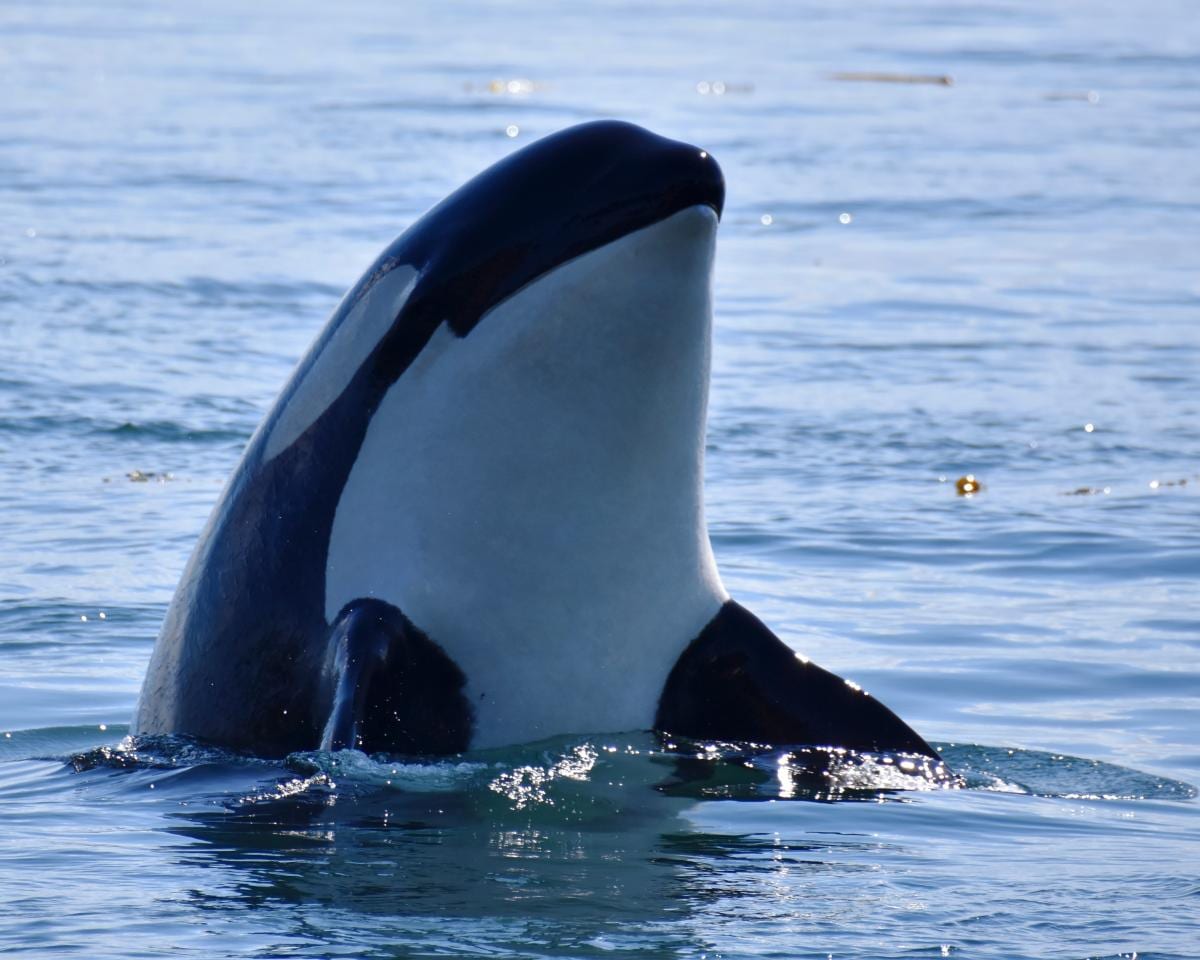 A very special population of orcas, called Southern Resident killer whales, live in the coastal ocean waters off Northern California, Oregon, Washington, and British Columbia. These unique orcas are critically endangered with extinction, with only 73 individuals remaining as of September 2022. While two recently born baby orcas provide a glimmer of hope, we must act quickly and decisively, or else this distinct orca population will be doomed to extinction. We need to do everything we can to save them.

A Unique Population of Orcas 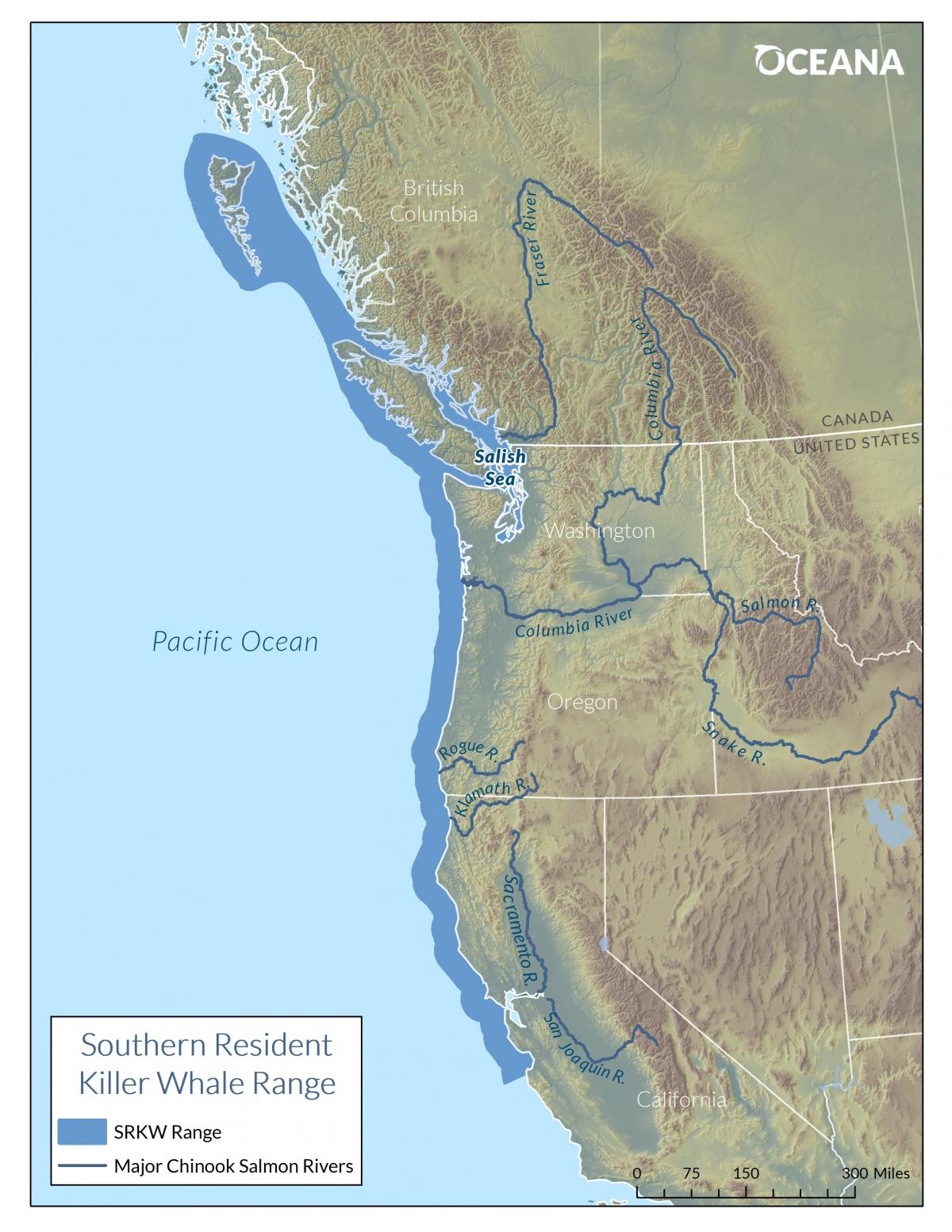 Unlike other orca populations in the Pacific that prey on marine mammals or sharks, the Southern Residents are specialized salmon hunters. And of all the Pacific salmon, the Chinook (King) are the most prized of all. In fact, Chinook salmon make up 80% of the orcas’ diet.

From late spring through fall, Southern Resident killer whales are often seen chasing Chinook and other salmon in the protected ocean waters of the Pacific Northwest, including the Salish Sea regions of the Strait of Juan de Fuca, Strait of Georgia, and Puget Sound. In recent years, however, because of a lack of food, too much noise, or both, they are spending fewer days in the Salish Sea. Increasingly Southern Residents are feeding off the outer coast of British Columbia’s Vancouver Island or offshore Washington, and Oregon. And they have even been observed as far south as Monterey Bay, California. It is now known these coastal ocean waters are essential to Southern Residents.

Southern Resident orcas consist of one clan, each with distinct vocal dialects. Within the clan, there are three pods (J, K, L) which socialize internally, and migrate and forage as distinct groups. They are heavily researched and monitored and every orca has been given its own individual name. 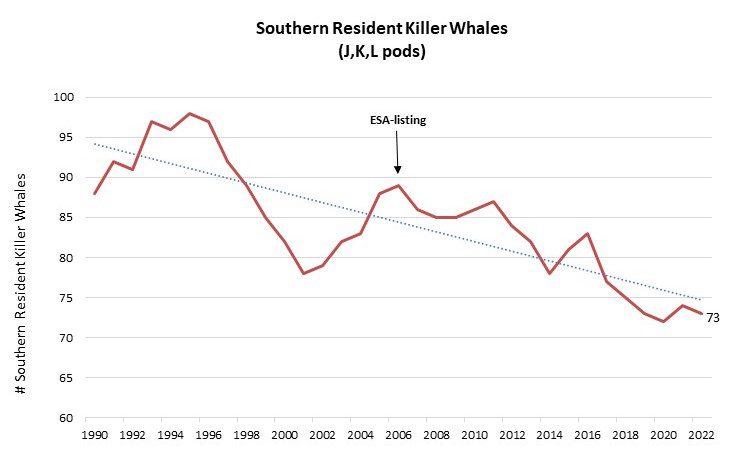 Figure: Southern Resident orcas have continued to decline since being listed as endangered under the Endangered Species Act (ESA).1  This reflects population data as of September 2022.

Southern Resident killer whales are threatened by vessel noise and interactions, contaminants, and lack of available prey. Of these threats, a lack of their favorite prey — Chinook salmon — is the number one threat to the recovery of the Southern Residents. Over two-thirds of the orcas’ pregnancies failed between 2008 and 2014 because moms were not getting enough salmon to eat.2 In addition, many females in the population are nearing the age where they will no longer be able to reproduce. This is compounded by the fact that only 60 percent of baby orcas survive their first few years of life, and those chances decline when the calves are unable to receive enough nutrition. 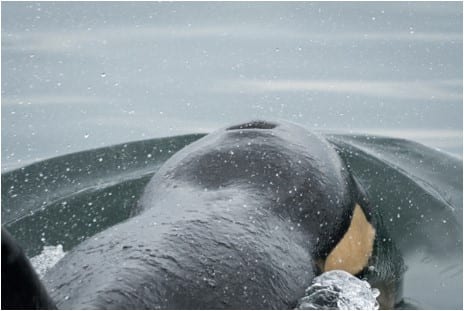 Many Chinook populations have declined and dozens are already extinct,3 due to dams on salmon streams, habitat loss and too much fishing pressure. In its Southern Resident killer whale recovery plan, the National Marine Fisheries Service states, “Perhaps the single greatest change in food availability for resident killer whales since the late 1800s has been the decline of salmon in the Columbia River basin.”4 The Columbia River Basin once produced between 10 and 16 million salmon annually and the Snake River has some of the most intact habitat available for spawning salmon.

We Can Recover Salmon and Save Orcas

Oceana is advocating for a number of actions to protect and recover these endangered orcas including protecting the orcas’ habitat and recovering Chinook salmon so these animals have enough to eat.

Recently Oceana advocated for a new approach to ocean salmon fisheries where catch levels and conservation measures are set in consideration of the needs of the Southern Resident orca population. As a result, in November 2020 the Pacific Fishery Management Council took action to amend the Pacific Coast Salmon Fishery Management Plan with new safeguards for the orcas when Chinook population drop below a certain threshold. The fishery council and National Marine Fisheries Service now have the first ever fishery plan designed to consider the foraging needs of Southern Resident orcas. Future actions are needed to ensure the threshold is appropriately set and that the conservation measures are effective.

In 2021 the National Marine Fisheries Service expanded the designation of critical habitat for Southern Residents so that it now extends along the outer coast of Washington, Oregon and Northern California as well as Washington’s Salish Sea. The critical habitat designation is designed to recognize and protect the features of these areas that are essential to the conservation of Southern Resident orcas. Essential habitat features include water quality, prey abundance, and safe passage for migration, resting and foraging.

To address the lack of prey, progress must be made to recover Columbia and Snake River salmon populations, where seven of the top 15 “priority Chinook stocks” for Southern Resident orca originate.5

Oceana supports improving fish passage and restoring habitat in the Columbia Basin to help recover threatened priority Chinook runs, restore salmon to healthy and naturally productive levels and increase prey for Southern Resident orcas. The survival of juvenile salmon can be increased if the fish can be aided past dams by going over spillways, as opposed to going through the powerhouses, which contain electricity-generating turbines and are increasingly deadly for fish. Salmon survival can also be greatly boosted by removing four dams on the lower Snake River. 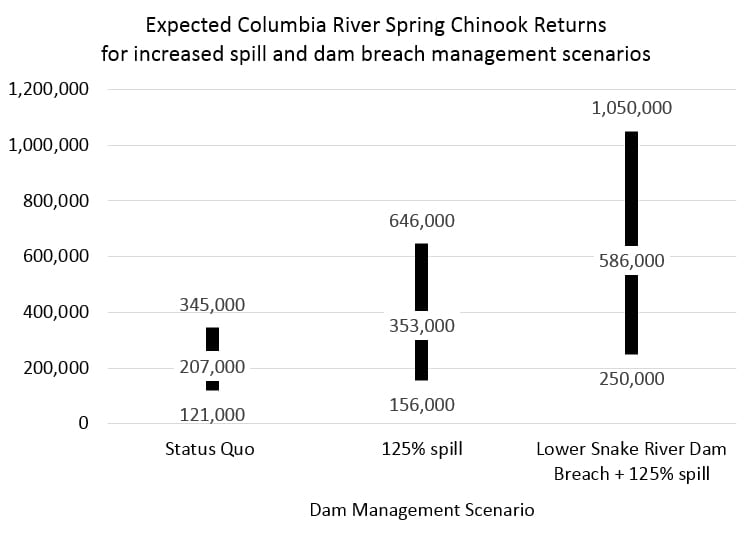 Figure: Spring Chinook returns and expected spring Chinook returns to the mouth of the Columbia River under the current federal Columbia River hydropower system spill management framework (status quo) and under revised spill and Lower Snake River (LSR) dam breach management scenarios.6 Breaching the four lower Snake River dams and increasing spill over other dams – to 125% “total dissolved gas” –  is expected to result in up to one million adult spring Chinook returning to the mouth of the Columbia. The range in estimates reflect returns under variable environmental conditions.

While lower Snake River dam removal is a big, difficult change, there are pathways forward to get there that will ultimately benefit people, fish and orcas. Now is the time to advance solutions that help people and communities and allow for healthier, more resilient ecosystems for Chinook and dependent wildlife. If bold and comprehensive actions are not taken soon, these animals may be lost forever.

To learn more about the plight of Southern Resident orcas check out:

Watch: Orcas are dying in the Pacific Northwest. Here’s why from Oceana