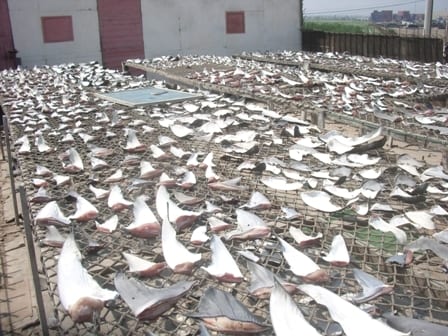 Shark finning is the brutal practice of slicing off a shark’s fins, often for use in shark fin soup, an Asian delicacy. The shark — sometimes still alive — is thrown back into the water to bleed to death.

Shark fin soup was once an Asian delicacy reserved for the wealthy but with a growing middle class, shark fin soup is now becoming common fare at weddings, banquets and business meetings. A bowl can cost up to US $100, making the fins easily the most lucrative part of the shark.

Since shark meat is inferior to other fish and the bodies are bulky and take up precious cargo space, sharks are finned around the world. This brutal practice is also incredibly wasteful; shark finning only utilizes one to five  percent of the shark’s body weight, removing an essential food source from many communities.

In addition, without the fins attached, many sharks can’t be identified, which further impedes management. Estimates suggest that between 26 and 73 million sharks are finned each year, all for a tasteless product that translates to “fish wing” and adds nothing more than structure to a broth.