Too Few Fish: A Regional Assessment of the World’s Fisheries 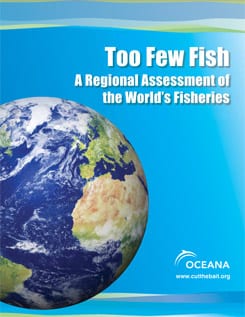 A 2008 report by Oceana revealed that at most, 17% of the world’s fisheries should be considered capable of any growth in catch at all.  The upward trend of global marine fish catch has begun to decline, suggesting the maximum long term potential of the world marine capture fisheries has been reached.  There is no hidden reserve; the world’s oceans are in trouble.

The majority of the world’s fisheries are exploited at or beyond their maximum sustainable potential.

Continued fishing on a fishery with an unknown stock status could lead to the depletion of the resource before it’s too late.

Reductions in effort and catch need to be included as part of a fisheries management regime.

The decline in fisheries not only affects the economy, but the oceans.