What are corals? - Oceana USA Skip to content
LnRiLWhlYWRpbmcuaGFzLWJhY2tncm91bmR7cGFkZGluZzowfQ==
LnRiLWNvbnRhaW5lciAudGItY29udGFpbmVyLWlubmVye3dpZHRoOjEwMCU7bWFyZ2luOjAgYXV0b30gLndwLWJsb2NrLXRvb2xzZXQtYmxvY2tzLWNvbnRhaW5lci50Yi1jb250YWluZXJbZGF0YS10b29sc2V0LWJsb2Nrcy1jb250YWluZXI9ImQwMTJhMWJlODdmM2UwZjc5MzMwODI2ZDkxYjdlYmFkIl0geyBwYWRkaW5nOiAwO21hcmdpbjogMDsgfSAudGItaGVhZGluZ1tkYXRhLXRvb2xzZXQtYmxvY2tzLWhlYWRpbmc9ImFhMGUzNGM0MjFiNmNhOWNhM2FlMWMwZTNlMzYwYjVkIl0gIHsgZm9udC1zaXplOiAzMnB4O3RleHQtYWxpZ246IGNlbnRlcjsgfSAgQG1lZGlhIG9ubHkgc2NyZWVuIGFuZCAobWF4LXdpZHRoOiA3ODFweCkgeyAudGItY29udGFpbmVyIC50Yi1jb250YWluZXItaW5uZXJ7d2lkdGg6MTAwJTttYXJnaW46MCBhdXRvfSAgfSBAbWVkaWEgb25seSBzY3JlZW4gYW5kIChtYXgtd2lkdGg6IDU5OXB4KSB7IC50Yi1jb250YWluZXIgLnRiLWNvbnRhaW5lci1pbm5lcnt3aWR0aDoxMDAlO21hcmdpbjowIGF1dG99ICB9IA==

Widely distributed from the Bering Sea to California, Pacific coldwater corals are found at depths of 100 to 10,000 feet in areas of rich nutrient flow along the Pacific shelf and slope. Two-thirds of all known coral species live in waters that are deep, dark, and cold. Surviving much colder temperatures than tropical species, coldwater corals can withstand temperatures as low as 30° F.

Individual corals, or polyps, grow together to form colonies and support themselves by capturing small food particles with nematocysts, which are like tiny harpoons. Unlike many reef-building tropical and sub-tropical corals, coldwater corals do not obtain energy directly from the sunlight; instead they capture microscopic organisms and detritus (organic debris formed from the decay of organisms) from the surrounding water. Colonies of polyps share food among themselves, which allows the colony to grow higher into currents and access more food. Some coral gardens contain more than one hundred species of corals and sponges towering up to ten feet tall, yet they advance at a rate of only half an inch each year. Setting the ecosystem foundation, these complex seafloor structures support areas of the highest biodiversity on the Pacific coast.

In addition to providing the foundation for some of the most prolific ecosystems in the world, coldwater corals may also be important for pharmaceuticals and biotechnology. Other corals are already being tested to produce antibiotics, pain killers, and medicines to treat cancer, asthma, and heart disease. Furthermore, corals are important recorders of climate change. Living hundreds to thousands of years, coral colonies allow researchers to study, discover, and confirm changes in the climate over the centuries. 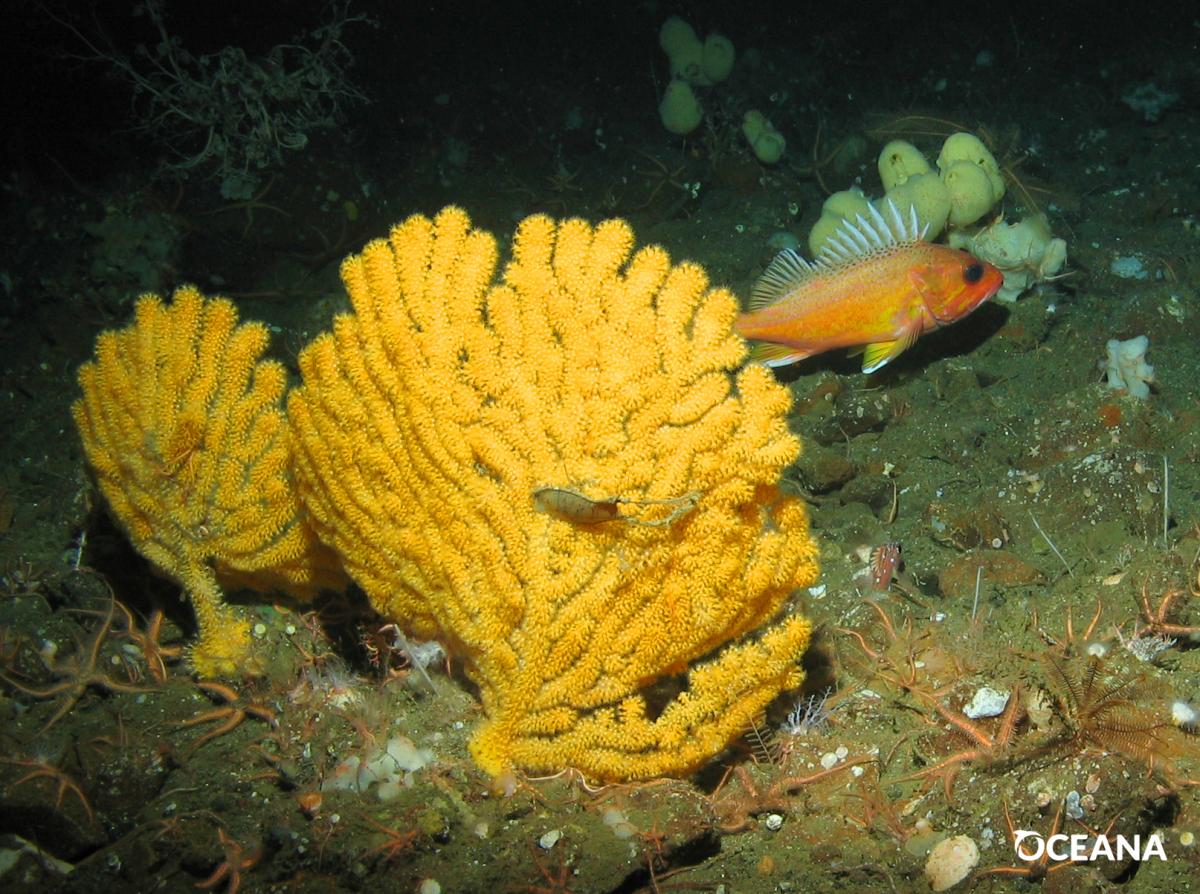 Gold coral with a greenspotted rockfish (Sebastes chlorostictus) nearby. A shark egg case is attached to the gold coral, Santa Cruz Island, California 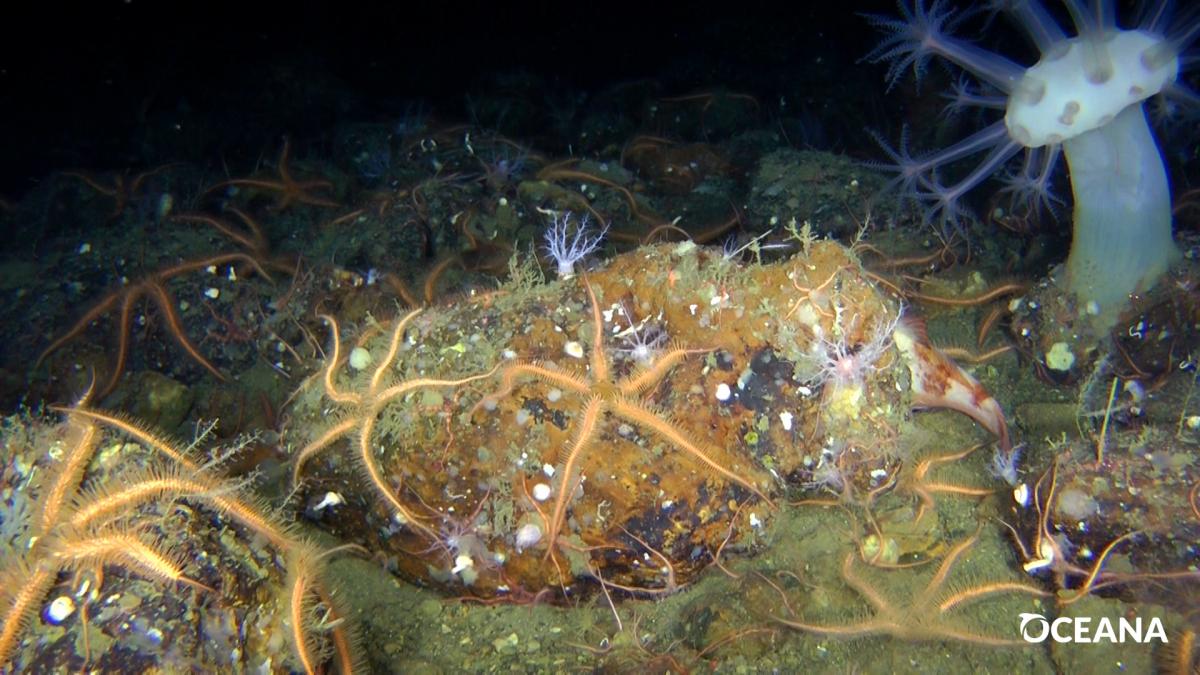 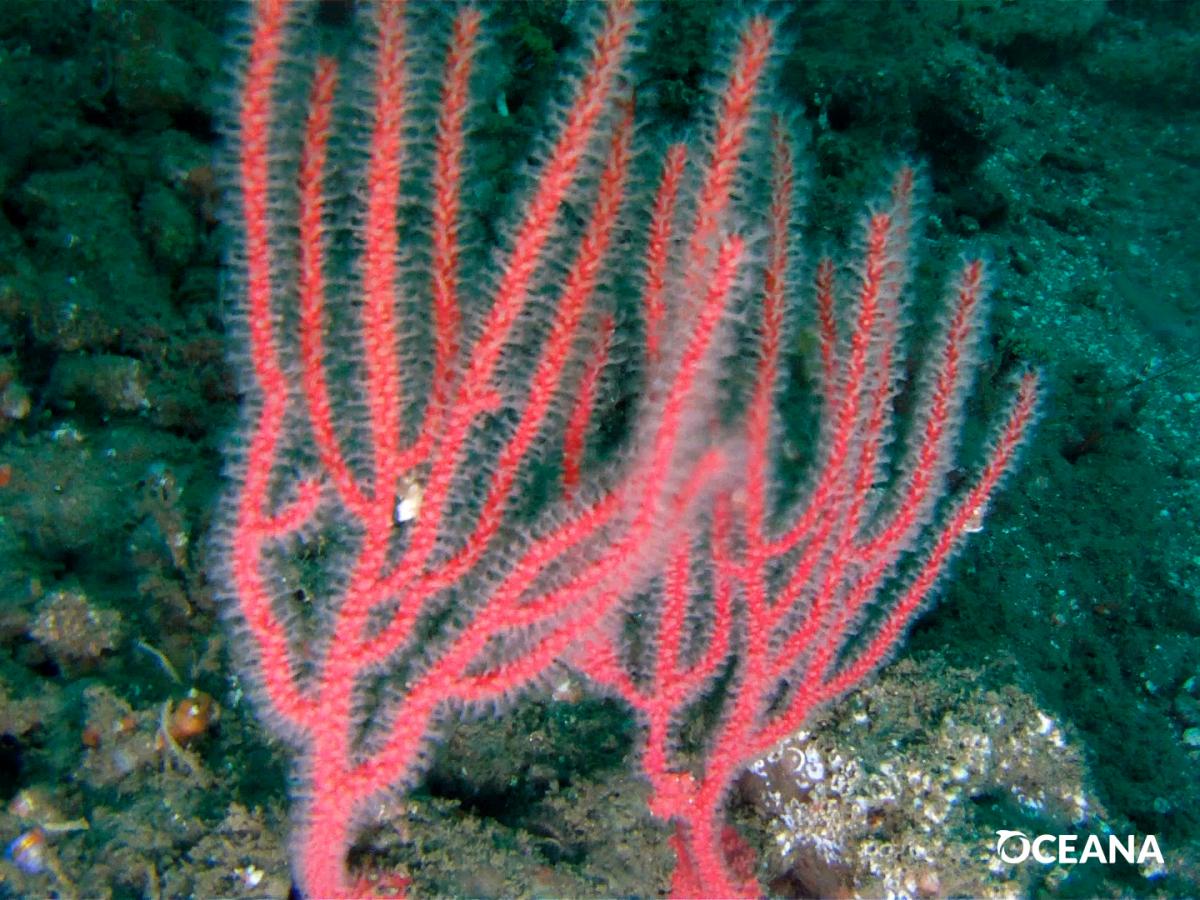 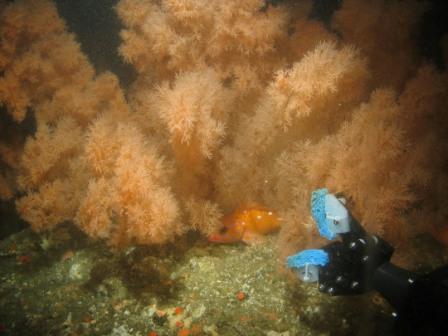