What are sponges? - Oceana USA Skip to content
LnRiLWhlYWRpbmcuaGFzLWJhY2tncm91bmR7cGFkZGluZzowfQ==
LnRiLWNvbnRhaW5lciAudGItY29udGFpbmVyLWlubmVye3dpZHRoOjEwMCU7bWFyZ2luOjAgYXV0b30gLndwLWJsb2NrLXRvb2xzZXQtYmxvY2tzLWNvbnRhaW5lci50Yi1jb250YWluZXJbZGF0YS10b29sc2V0LWJsb2Nrcy1jb250YWluZXI9ImQwMTJhMWJlODdmM2UwZjc5MzMwODI2ZDkxYjdlYmFkIl0geyBwYWRkaW5nOiAwO21hcmdpbjogMDsgfSAudGItaGVhZGluZ1tkYXRhLXRvb2xzZXQtYmxvY2tzLWhlYWRpbmc9ImFhMGUzNGM0MjFiNmNhOWNhM2FlMWMwZTNlMzYwYjVkIl0gIHsgZm9udC1zaXplOiAzMnB4O3RleHQtYWxpZ246IGNlbnRlcjsgfSAgQG1lZGlhIG9ubHkgc2NyZWVuIGFuZCAobWF4LXdpZHRoOiA3ODFweCkgeyAudGItY29udGFpbmVyIC50Yi1jb250YWluZXItaW5uZXJ7d2lkdGg6MTAwJTttYXJnaW46MCBhdXRvfSAgfSBAbWVkaWEgb25seSBzY3JlZW4gYW5kIChtYXgtd2lkdGg6IDU5OXB4KSB7IC50Yi1jb250YWluZXIgLnRiLWNvbnRhaW5lci1pbm5lcnt3aWR0aDoxMDAlO21hcmdpbjowIGF1dG99ICB9IA==

Sponges have growth rates on the order of millimeters per year, living to be hundreds to thousands of years old. The large glass sponges found off the coast of British Columbia, for example, have been dated to be 220 years old. However, based on current knowledge of growth rates, the average age of these sponges is estimated to be 35 years old.

Glass sponges in particular are remarkable seafloor suspension feeders. Each of these single-celled animals can produce a skeleton made of nearly pure silica that can reach a meter or more in height. Until very recently, glass sponge reefs in the Pacific Northwest were known to occur only off British Columbia. Although individual glass sponges can be found at depths of 500 to 3,000 meters, they are found in relatively shallow waters in only a few areas of the world—Antarctica, New Zealand, the Pacific Northwest, and in a few caves in the Mediterranean. Like corals, glass sponges not only create new and complex habitat in areas containing live individuals, but also in regions of the reef with dead sponges, and adjacent to the reefs as well. 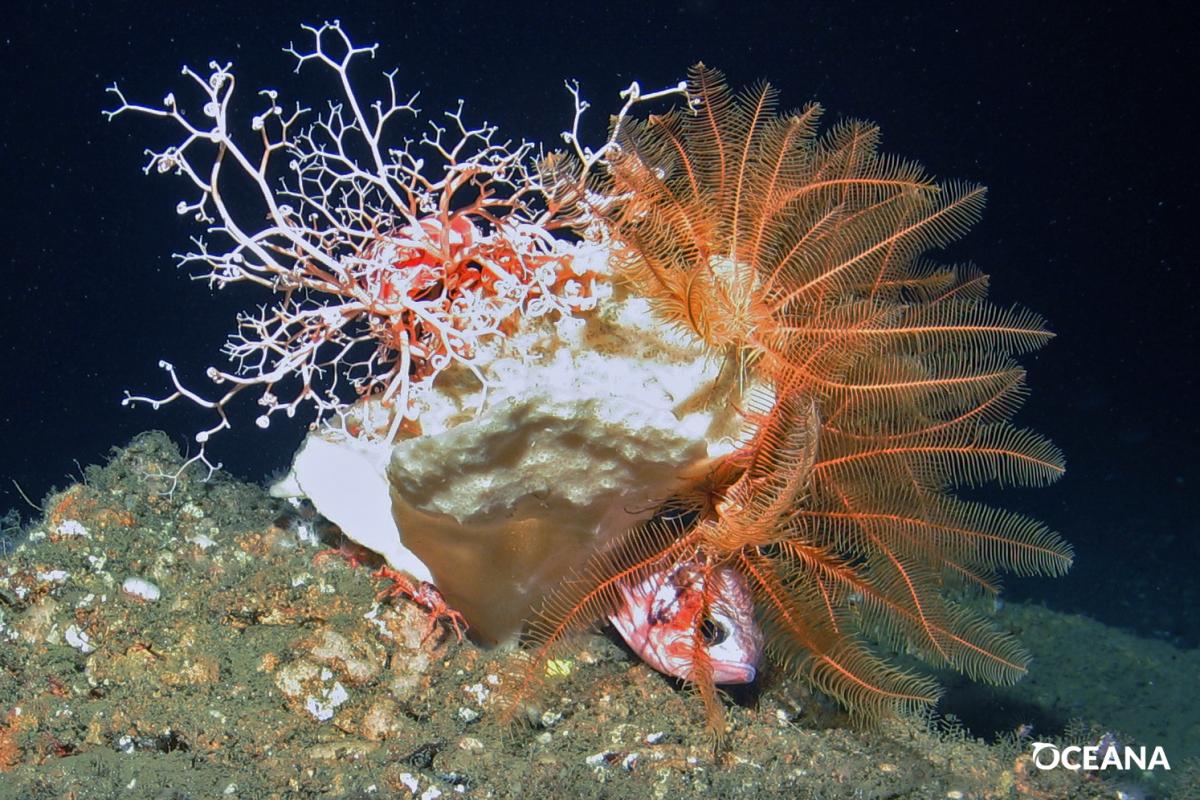 A rockfish finds shelter under a sponge adorned with a brightly colored basket star and fern-like feather stars, Southern California.