What is Ocean Acidification? 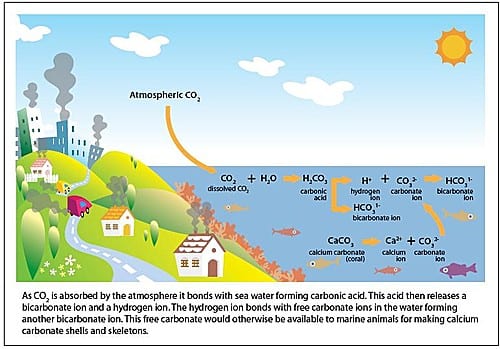 When carbon dioxide enters the ocean, it combines with seawater to produce carbonic acid, which increases the acidity of the water, lowering its pH. Although it is unlikely that the ocean will ever become actual acid (fall below a pH of 7.0), the term acidification refers to the process of the oceans becoming more acidic.

As the oceans become more acidic, it will become progressively more difficult, if not impossible, to build calcium carbonate shells and skeletons. By the middle to end of this century, parts of the oceans will be corrosive enough that they will cause already formed calcium carbonate to dissolve.

The pH of the ocean surface has already fallen 0.1 units, representing a 30 percent increase in acidity. By the end of this century, if current emission trends continue, it could fall by another 0.3 units, thereby increasing the acidity of the oceans by almost 2.5 times. The pH scale can be misleading because it is logarithmic, so its units may seem incremental, when in fact, they represent major changes in acidity.

For example, a seemingly small drop of 0.4 units in pH actually represents more than a doubling (an almost 150 percent increase) in the acidity of the ocean. In the last 300 million years or more, ocean pH has never fallen to more than 0.6 units below the level of 1750. However, if fossil fuel use continues unabated over the next couple of centuries, ocean pH could fall more than 0.7 units below the 1750 level.

The current concentration of carbon dioxide in the atmosphere is much higher than it has been at any time over the course of human civilization. In fact, as far back as scientists have currently determined (800,000 years), the natural range has not exceeded 300 ppm. If we continue on our current emissions trajectory, by 2050 ocean pH will be lower than at any point in the last 20 million years.

Even more significant is the rate at which ocean chemistry is changing. The current rate of acidification is at least 100 times faster than any time period over the last few hundred thousands years and is it most likely unprecedented in Earth’s history. Carbon dioxide is being absorbed so rapidly that it is likely that many marine organisms will not be able to adapt to the quickly changing conditions.

One of the major concerns is that the most vulnerable species to ocean acidification are also some of the most important for healthy marine ecosystems. Ocean acidification may adversely impact some plankton species, and their loss would ripple through food webs to impact larger animals like fish and whales.

Corals are also very susceptible to the impacts of ocean acidification and coral reefs are some of the most beautiful and biologically diverse habitats on the planet. Ocean acidification has the potential to cause widespread changes in marine ecosystems which may eventually disrupt the ocean goods and services we depend on. If nothing is done to help curb ocean acidification, its negative impacts may be felt on the marine environment, local communities, and all the way up through the global economy