Where are Great White Sharks? 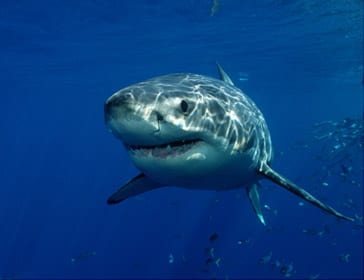 Great white sharks are globally distributed with concentrations near South Africa, Australia/New Zealand, the North Atlantic, and Northeastern Pacific. However, the great white sharks off the U.S. West Coast are an isolated population that reside off California and also include individuals off Guadalupe Island, located 150 miles off the west coast of Baja California, Mexico.

While this unique population of great whites spends about half of the year around these sites, they make impressive migrations far offshore near the Pacific Gyre, fondly called the “white shark café” as researchers think they make the trek there to feed or breed. To a lesser extent, these great whites also migrate to the Hawaiian archipelago, though scientists are only beginning to understand the motives behind these long migrations.

Curious where West Coast great white sharks are now? Many great white sharks have been marked with satellite tags so researchers can continually monitor their movements. Follow the tracks of these great whites at Tagging of Pacific Predators or download the shark net app to your iPhone.