Download our new report: Net Loss: The Cost of Bottom Trawling in the Gulf of Alaska

In May of 2022, Oceana conducted an expedition to document corals and other seafloor habitats in the Gulf of Alaska seafloor to support our campaign to protect these areas from destructive bottom trawling. Throughout the expedition, we found a Gulf of Alaska teeming with life from the surface to the seafloor. Here are some highlights:

Gulf of Alaska Expedition from Oceana on Vimeo.

Our oceans face many threats including climate change, pollution, overfishing, bycatch, habitat destruction, and other human impacts. All of these put extreme stress on marine ecosystems.

The cold and remote waters of the Gulf of Alaska are no exception; yet there is one human-caused threat that has a practical solution that has already been applied to most in the U.S. and Canadian waters from the U.S. Arctic to Southern California: freezing the footprint of bottom trawling.

Bottom trawling is a type of fishing where huge nets are dragged for miles along the seafloor to catch flatfish like flounder or sole. Yet trawl nets also destroy ancient corals and other important habitats as they catch everything in their path. This habitat destruction has cascading impacts to fish and other sea life, ultimately threatening ocean ecosystems.

According to the National Academy of Sciences, bottom trawling is the most destructive form of fishing on seafloor habitat like corals and sponges. In addition to harming seafloor habitat, bottom trawlers in Alaska catch and often waste nontargeted salmon, halibut, crab and other species central to the lives of Alaskans. The Gulf of Alaska is the last place on the U.S. west coast where industrial bottom trawling can still be conducted in large areas of corals and other ocean habitats vital for fish and other animals. 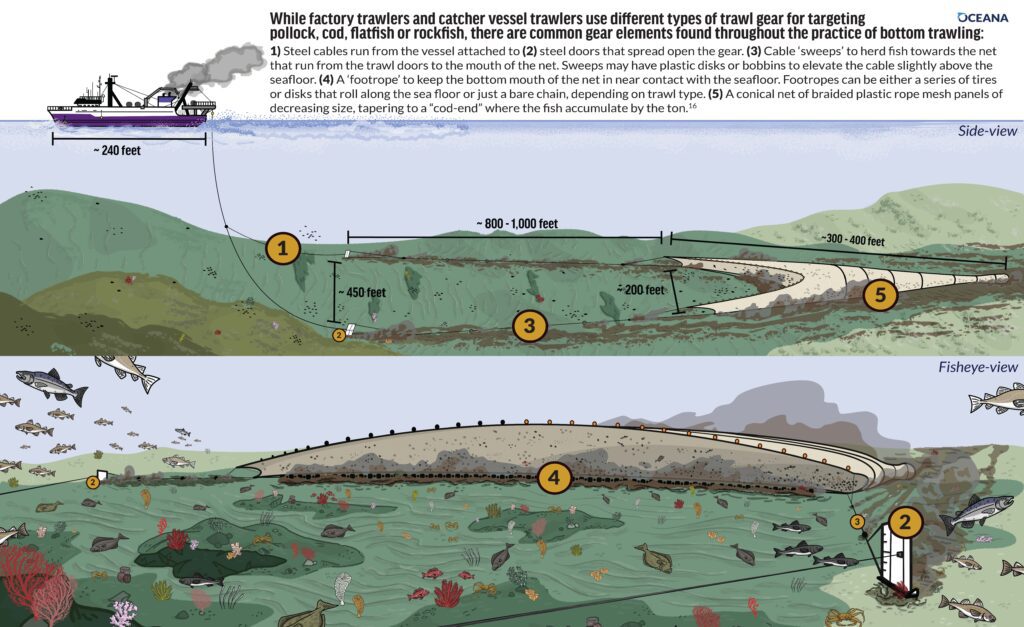 However, there is a solution, one that has been implemented throughout much of the North Pacific. Oceana has worked with fishery managers, fishermen, indigenous communities, and other organizations to save seafloor habitat through a “freeze the footprint” approach to bottom trawling. In this approach, bottom trawling can only continue in areas that have already been trawled, protecting new areas from being destroyed and ensuring untrawled, vibrant habitats remain intact. The freeze the footprint approach also protects key seafloor habitats within the existing footprint such as coral gardens, seamounts, canyon heads, rocky reefs, and sponge beds.

Along with limiting bycatch and protecting important ecological areas within the trawl footprint, this approach represents a win-win for healthy fisheries and healthy oceans. It’s time to implement this same approach in the Gulf of Alaska. The North Pacific Fishery Management Council’s “Essential Fish Habitat” review process is currently underway, where conservation measures for ocean habitats in Alaska are considered once every five years. This time measures must include freezing the footprint of bottom trawling in the Gulf of Alaska, limiting waste of nontargeted species like salmon and halibut, and protecting important ecological areas within the existing trawl footprint.