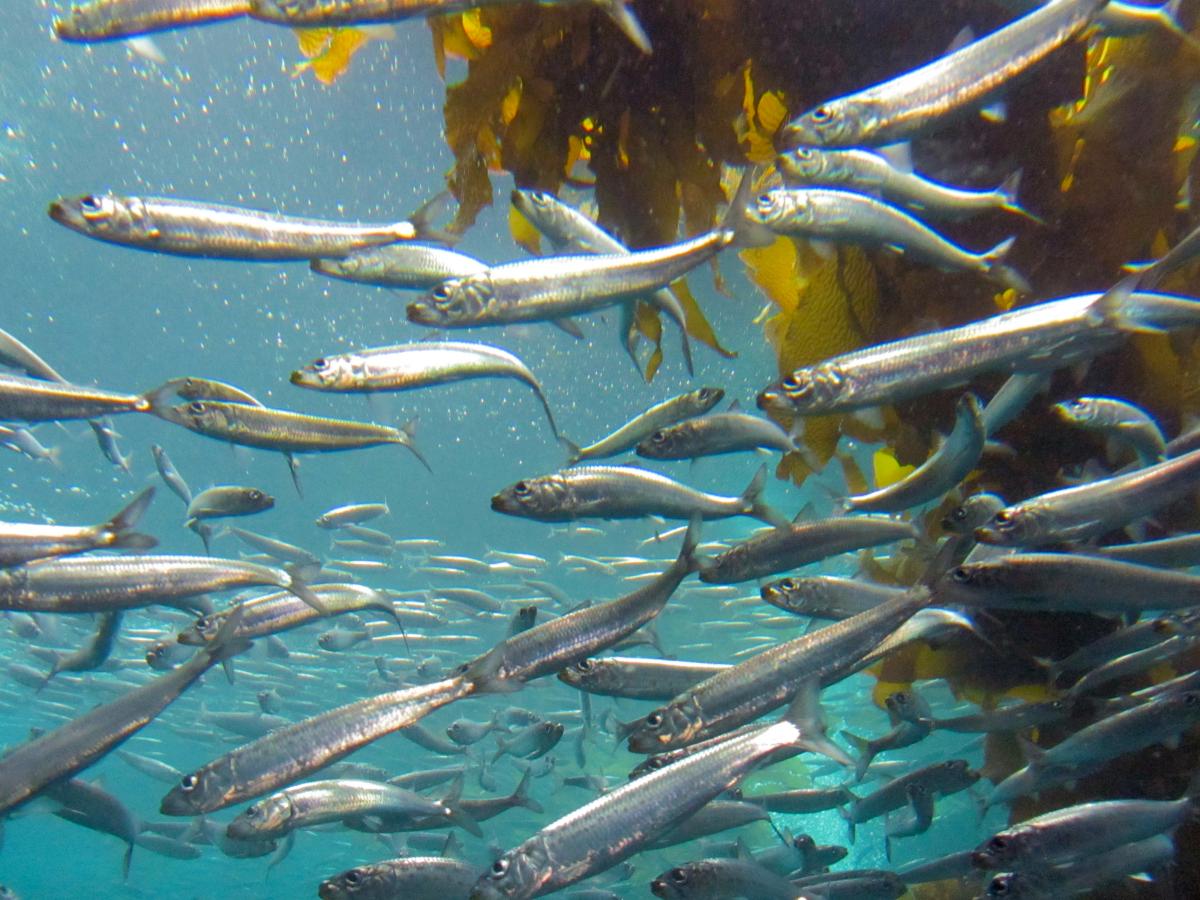 Pacific sardines are a major forage species in the California Current Ecosystem from British Columbia to Baja California. Feeding primarily on plankton, they play a critical role in transferring energy from low to higher trophic levels. Many marine mammals, fish, and seabirds rely on Pacific sardines as a large part of their diet. These small fish generally prefer warm waters, which subjects their population to fluctuations likely associated with the Pacific Decadal Oscillation (PDO) and other oceanic conditions. While the population naturally fluctuates in relation to changing oceanographic conditions, fishing can have a dramatic effect on sardine population dynamics and its ability to provide forage for predators.  In particular, when sardines are at low abundances or in low productivity conditions, fishing pressure exacerbates the population decline, depletes the diversity of age classes, and affects population structure in a manner that makes it more difficult for a population to recover when conditions become more favorable.

In the 1930s and 1940s Pacific sardines supported the largest fishery in the western hemisphere. The iconic “Cannery Row” in Monterey, California was built around this ballooning fishery. In 1936 the Pacific sardine fishery peaked at 800,000 metric tons, followed by a dramatic fishery collapse in the 1950’s due to a combination of fishing pressure and poor ocean conditions. It did not begin to recover until the 1980s, and since then the population has yet to return to the levels seen in the Cannery Row era. In fact, the Pacific sardine population has recently collapsed again.

The Pacific sardine fishery off California, Oregon and Washington is managed by federal fishery managers under the “Coastal Pelagic Species Fishery Management Plan” pursuant to the nation’s fishery management law; the Magnuson-Stevens Fishery Conservation and Management Act. There are major flaws with how sardines are currently managed.  The sardine fishery is in crisis, with the population having declined by 74% over the last seven years. The crux of the problem is that the Pacific Fishery Management Council (PFMC) and National Marine Fisheries Service tasked with managing the West Coast sardine fishery does not currently account for the important role sardines play as food for other species when deciding how much to take out of the ocean and it has failed to accurately account for sardine catch in Mexico and Canada – that catch the same sardine population – when setting U.S. catch levels.

In December 2011 Oceana, represented by the public interest law firm Earthjustice, filed a lawsuit against the National Marine Fisheries Service for failing to protect key forage species, including Pacific sardine, when it adopted new formulae for calculating annual harvest guidelines and catch limits for stocks in the Coastal Pelagic Species fishery. We assert that NMFS failed to follow the basic mandate of the Magnuson-Stevens Act to achieve “optimum yield” (a requirement to account for ecosystem needs) and prevent overfishing.

Most recently, we have been asking the PFMC to increase the buffer in the equation they use to determine how many sardines must be left in the water. Akin to a “forage reserve”, the PFMC refers to this buffer as the “cutoff”, whereby fishing can only occur when there is more than 150,000 metric tons of sardines in the ocean. Unfortunately, this is far too low to ensure adequate forage for predators and prevent overfishing.  Based on scientific recommendations by the Lenfest Forage Fish Task Force we are asking that this cutoff (buffer) be increased to at least 640,000 metric tons. This is approximately 40 percent of the average unfished sardine population. Under our approach, fishing would only occur when sardines are experiencing abundant, productive ocean conditions, and would give sardines a break when they are most vulnerable.  By leaving more sardines in the ocean it will help ensure that sardines will not be overfished, that the population can better recover during times of low abundance, and that dependent predators like sea lions and brown pelicans will be able to find enough food.

The U.S., Canada, and Mexico all manage the same population of sardines irrespective of each other. The Pacific Fishery Management Council uses an equation that asserts that the U.S. gets 87 percent of the coast-wide catch shared by the three countries.  In recent years, however, Mexico and Canada have caught far more than the remaining 13 percent, resulting in the coast-wide catch greatly exceeding target levels.  The U.S., Mexico and Canada collaboratively manage the shared population of Pacific sardines. Achieving a shared scientific understanding of the stock status and distribution of sardines across the three nations could serve as the basis for more coordinated tri-national sardine management.